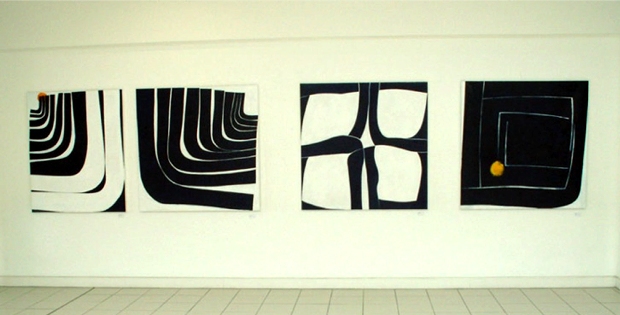 Come and enjoy an interesting and informative talk by Roger Large, an abstract artist based in Somerset.
Roger has held exhibitions at numerous galleries in England and in Europe including The Royal Academy and The Bruton Street Gallery, London. His paintings are held in many public and private collections, these include BP and IBM.

A Word from Roger Large

I was born on Merseyside in 1939. The schools I went to did not cater for an artistic bent; indeed I was not aware of such a subject. National Service saved me where I found a number of art students. This awoke something in me and the education officer on the camp in Northumberland got me a day release to go to the Art College in Newcastle – fifty miles there and fifty miles back.
On demobilisation I made for Liverpool Art College. I was accepted on the strength of two small sculptures I had made. I had a few O-levels but these didn’t seem to be vital. I got in and enjoyed four years in that marvellous place – with a grant! And what a place if you think of Liverpool in the early 60s.
In the fourth years I was encouraged to apply to the Royal College of Art in London and won a place – with another grant – for three years. It was my landscapes that won me a place and I still work from the same subject today to keep me in touch with my past when I worked in the hills of North Wales. Life in London was very different though exciting. I am not a city person and working in London was a difficult adjustment.
My work is still landscape based – not of the landscape but about it. The RCA broadened my outlook, I think, and the colours have darkened, but then the paintings I love have a lot of dark in them: Rembrandt, Goya, Caravaggio, Bacon, Rothko,Motherwell, and the great JMW Turner who started me off.