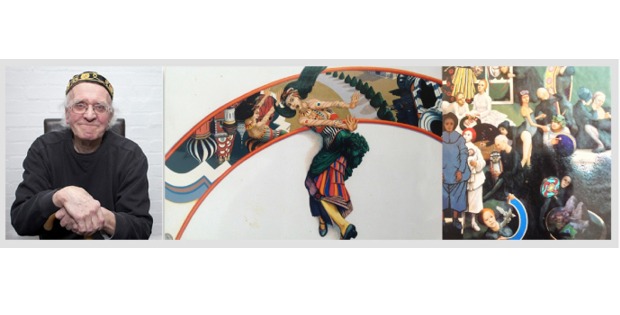 An important exhibition of a selection of Jack’s larger works which should not be missed.
The Creative Innovation Centre is proud to host this important exhibition of large paintings by local artist Jack Coulthard.
Now in his eighties, Jack Coulthard lives and works in Kingston St Mary, near Taunton.
He is an artist of international reputation, a novelist and poet, and literary references from writers like Ezra Pound, Joyce and Kafka mix with myth and legend to feature prominently as a source of inspiration in his work.

In Coulthard’s view it is important for artists to be able to communicate with people and he is able to do this without pretension or condescension.  He is kindly and has a wonderful sense of fun.
“Artists are perhaps entertainers but not social workers. They are kinds of jugglers, tricksters and conjurers. If they are lucky they are kinds of shamans as well”.
Born in Baildon near Bradford in 1930 and educated at Salt’s in the amazing Victorian Saltaire. Jack studied drawing and painting at what was then Leeds College of Art and, after military service in the army of occupation in Germany, worked in general education in the Black Country.
After a year in Italy, Jack and his wife Barbara came to Taunton where he taught drawing and painting for some years at Somerset College of Art.  In 1970 he left teaching and has painted professionally ever since at his home of fifty years in Kingston St. Mary.
He has had a huge influence on the art movement in this country.  Indeed, many of his students, such as, Andre Wallace went on to become famous in their own right.
After exhibiting with regular one-man shows in London between 1971 and 1979 Jack chose to work outside the mainstream, realising, perhaps, that his preoccupations and fascination with a different tradition have placed him outside the current aesthetic.
But he is not a recluse! He has had regular one-man shows in Taunton, spent much of his time in Austria between 1994 and 2001, attracted by the Moritaten tradition, exhibited in New York, Columbus, Ohio and Udine, Italy, and several provincial cities in England.
“Of all the responses of praise or criticism of my paintings, the one I like best is the teenager’s who said ‘Wow, I’m going to do some of these.’
That I might have helped, along with some other non-aligned artists, to create a system, a way, an aesthetic, which is available to anyone with the normal quota of memory or imagination, is, for me, a more valued achievement than any reference to beauty of colour or skill in draughtsmanship.
Paintings ought to be fun, and joy and delight should be part of the process.”
Now in his eighties he continues to refine and extend what he believes to be a common language.
Jack is now pleased  to exhibit, in his home town, large pieces of work which many galleries have been unable to accommodate in the past.
There will also be affordable good quality prints and posters for sale and Jack will be at the Centre each Saturday throughout the exhibition if you would like to meet him.

This exhibition is a visual delight for young and old…come along and enjoy Jack’s impressive large paintings and enter into his world of humour and wit which is embodied in his paintings.

You will be entertained and take a way a whole new way of seeing things.