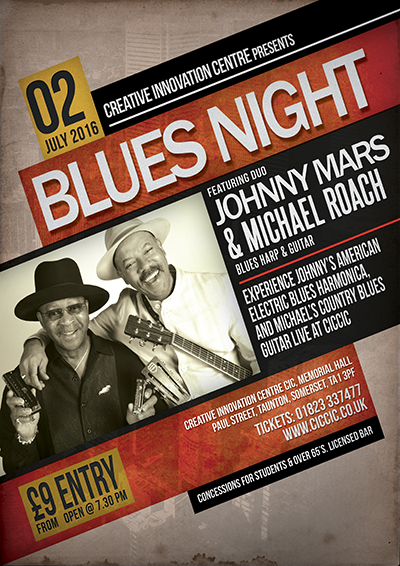 This amazing blues harmonica and guitar night brings the whole spectrum of the blues to life in Taunton on Saturday July 2nd and an excellent price for hearing from 2 of the most well-seasoned professional musicians and songwriters in the industry. Truly a night not to be missed.
We are very excited to have duo

Johnny Mars was born in Laurens, South Carolina. After graduating from high school, he gigged around New York and recorded with his band ‘The Burning Bush’ for Mercury Records. Johnny has been a popular American blues performer in the UK and Europe since the mid – 1970’s. 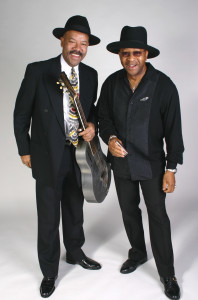 Johnny’s song writing, singing and explosive harp playing makes Johnny one of a kind. He is an innovative musician and has a dynamic stage persona. Although Johnny is best known as a leader of electric blues bands, for the past 8 years, he has formed a duo with acoustic country blues guitarist Michael Roach. Together, they mix city and country styles to great effect.
Over a long career, Mars has worked with Magic Sam, Earl Hooker, B.B. King, Jesse Fuller, Spencer Davis, Ian Gillan, Do-Re-Mi, Bananarama and Michael Roach.
Michael Roach, one of thirteen children born to Ted and Sadie Roach of Washington, D.C., USA, sings and plays guitar in an East Coast style of blues that dates back to the 1920s. After spending several years learning directly from such well known figures as John Jackson, John Cephas and Jerry Ricks, Michael Roach has developed his own style and is now an exceptional performer. He interacts with his audience and entertains as he plays.