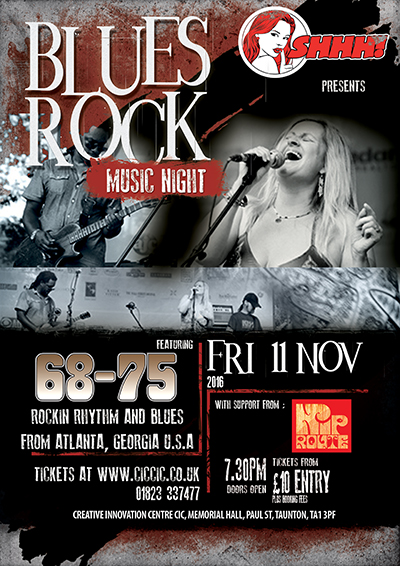 This amazing line-up of blues guitarist, musicians, songwriters and singers bring the whole spectrum of the blues rock and blues guitar and blue music to life in Taunton on Friday 11th Nov and an excellent price for hearing from some of the US & UK’s top well-seasoned bands/artists from the blues music genre.
We are very excited to have

Something a touch different for Shhh! who have organised this event with 68-75 who are straight out from Atlanta Georgia, USA.
68-75 offers straight ahead rock laced with soulful, emotionally raw vocals. The sound of this Atlanta, GA-based quartet is rooted in ’70s rock — influenced by the music of Free, Terry Reid, Humble Pie, Faces and Stone The Crows.

Hip Route are a 3 piece roots band from Wiltshire UK and part of The UK Roots Movement – using the old working ethic of playing live as much as possible making full use of Weissenborn, lap slide, acoustic and electric guitars, drums and bass to create a big sound.
So far Hip Route have been lucky enough to share a stage with Jason Mraz, Ben Howard, Newton Faulkner, The Hoosiers, Alabama 3, Them Is Me (ex-Reef and Basemant Jaxx), StringerBessant, Ben Ottewell (Gomez),Toploader, James Morrison, Watermelon Slim, Martin Harley Band and Rurrari Joseph among others.

Buy Your Tickets Below

An Event with an ID of "8578" could not be found. Please contact the event administrator for assistance.