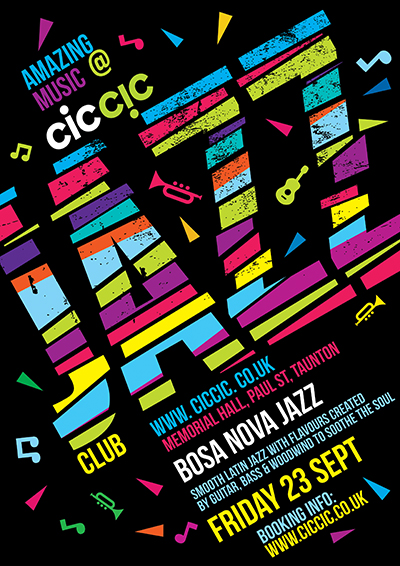 Friday 23rd Sept 7.30pm. £8.00 or £7.00 concession if booked online or £9 on the door with £8 concession.
CICCIC Jazz Club presents some of the best jazz players in the UK and on Friday 23rd Sept we have jazz band Bosa Nova Jazz and with many more amazing bands to come.

This well-seasoned jazz band with 6 players came together through meeting at diverse jazz workshops and more recently in the Wells Jazz Collective, mainly focussed on jazz-inspired music of the 1950s and 60s. Their smooth tunes, soft and hard melodies and precision will make any music lover want more.
Tony [alto sax and flute]
Tony discovered jazz in his school days (“subversive then!), at 16 began lessons on alto sax then switched to tenor in RAF bands during National Service. He added flute after being inspired by Frank Wess’s 1955 Opus de funk, which he continued during a 40 year break from sax playing. However, the pull of the saxophone eventually proved irresistible! He also loves early and baroque music and even some 20th century composers!
Terry [guitar]
An early starter, Terry began to learn the violin at age nine, moved later to accordion on which he played his first gig at age 15. This was overtaken by the guitar during a fashion for Skiffle. A “lightbulb moment’ happened on hearing a recording by the legendary jazz guitarist Barney Kessel. He has since toyed with the flute, but the heart is firmly set on one day conquering the guitar.
Jonathan [acoustic guitar]
We particularly value Jonathan’s very special touch and impeccable rhythm driving our latin tunes. Starting lessons on classical guitar (inspired by a John Williams recording) he much later came across Barney Kessel and became hooked on jazz. More recently, the music of guitar greats Paulino Nogueira and Baden Powell sparked off his keen interest in authentic Brazilian Bossa Nova
Sarah [vocals]
Drawing on her professional background in television and theatre, Sarah is also a true performer of classic jazz numbers, spilling out the different emotions carried in every song– to amuse, sadden or even excite you!
Richard [keyboard]
Richard is a pianist and violinist from Glastonbury. After doing a degree in classical music at Leeds College of Music, he has since focussed largely on the ‘dark arts’ of jazz and improvisation, and is a member of the house band of the Wells Jazz Collective, amongst other things.
Will Lang [bass]
Will’s jazz career started as a teenager in Bristol in the ‘80s, playing trumpet in the Juggernaut Big Band and going on to play electric bass in a quartet with Jake McMurchie (Get the Blessing, Michelson-Morley) while at university in the early ‘90s. After several years’ inactivity, upon moving to Taunton he started to play again in Tim Hill’s Albion Horns, becoming lead trumpet as this outfit evolved into the Big Noise Street Band. As a bass player, he feigns dislike of bossa-novas on the grounds that they are ‘too easy’, but would like to assure Tony that he enjoys playing them really.
An Event with an ID of "8470" could not be found. Please contact the event administrator for assistance.