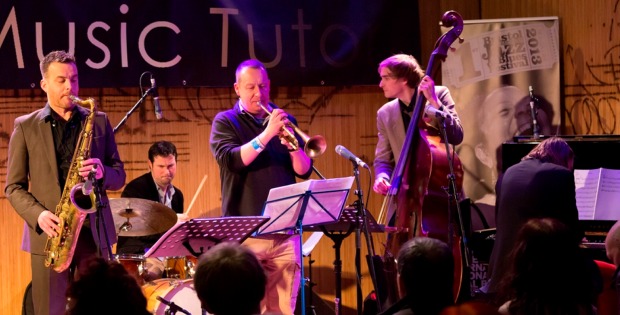 Bristol based trumpeter Andy Hague has been leading his quintet for over twenty years, and it is one of the most popular bands in the area.
The group has made many appearances at festivals such as Brecon, Swanage and Glastonbury, and recorded four broadcasts for the BBC’s Jazz Notes programme back in the 90s.
The band’s Jazz Services tour in 2007 received a glowing review in The Independent on Sunday – “The collective impact of what amounts to a South-West supergroup was close to overpowering.” 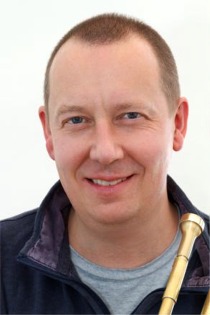 In April & May 2013 the quintet undertook a 14 date national tour with support from Arts Council England, taking in venues such as St Ives Jazz Club, Birmingham Jazz and London’s 606 Club. Some comments from promoters –
Teignmouth Jazz –  “And fabulous it was.  Everyone was buzzing after the gig.  “Really tight and sensitive playing and interaction… Fantastic… Well up to the national benchmark….The best gig I’ve been to recently….” were just some of the comments flying around.  And the Andy Hague Quintet CD, on sale at the venue, Cross My Palm, stands repeated playing.”
Stratford Jazz –  “the scene was set for an evening of quality jazz very much entrenched in the Blue Note era – accessible, straight-ahead and swinging.”
Hague’s current quintet line-up is Andy Hague – trumpet/flugelhorn, long-term associates Ben Waghorn – saxes and Jim Blomfield – piano, and younger generation rising stars Will Harris – double bass and Mark Whitlam – drums, and on their recent CD release Cross My Palm they are augmented on two tracks each by guests saxophonist Jake McMurchie and vocalist Brigitte Beraha.
Cross My Palm has received some excellent reviews:
Cross My Palm is a straight-ahead jazz album that bristles with energy, fun and great grooves—and swings like a very swinging thing too – Bruce Lindsay, All About Jazz.
A great band with Jim Blomfield on piano and Ben Waghorn on sax, excels – Phil Johnson, The Independent.
Cross My Palm is a consistently entertaining album which features some superb playing from all the members of the ensemble – thejazzmann.com
It is the sheer quality and power of the solos (Hague’s in particular, but also Blomfield’s consistently accomplished contributions) that really draw the ear to this wholly enjoyable set. – Chris Parker, LondonJazz.blogspot

More About the Band