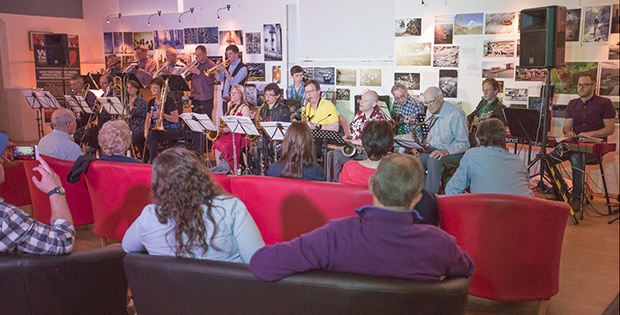 The first time Jazz big band DEF Tone 17 played CICCIC they were so good I was determined to catch their second gig, but found myself stuck in M4/M5 holiday traffic. I stumbled in through the lime green doors, late and dishevelled, half way through the first set when they were well into the swing of it…and I mean swing! The smooth tones of saxophones, trombones and trumpets blending with guitars and keyboard and held together by percussion were as tasty and reviving as vanilla ice. 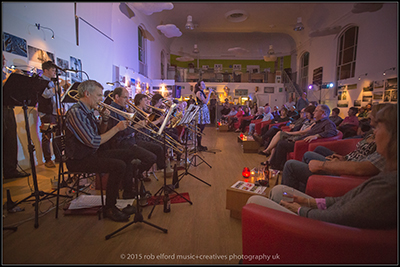 Dipping into the Great American Song book for some numbers, especially those sung by Chris Franks (That’s Life was ‘effing brilliant’ as one fan put it), the band is also not afraid to be a bit Charlie Mingus-edgy, or 21st century, such as Hannah Deason-Barrow’s smoky vocal rendering of Adele’s ‘Skyfall’: a mix of familiar and avant-garde that keeps surprising, like six-inch steel stiletto heels on a pair of favourite slippers.
And because CICCIC is an intimate space with no barrier between audience and performers it feels like they’re playing in your front room. With the physical presence of so many musicians it should be overwhelming, but it isn’t: it’s exhilarating, like a double espresso, a shot of bourbon and a rub-down with a velvet glove!
And according to band fixer Roly England the musicians love playing the venue, which has a relaxed, friendly ambience. They also appreciate the springboard that CICCIC provides local musicians. CICCIC took a chance on an unknown band and gave DEF Tone 17 their first ever gig last year. Watch out for their 3rd booking on 23rd July.
DEF Tone 17’s deadly rivals are the Deane Big Band (a Glen Miller/Count Basie style classic big band). Taunton is lucky to have 2 equally brilliant big bands. Come on CICCIC, book the Deane Big Band and let your customers be the judge!
Written by Fran Pitt