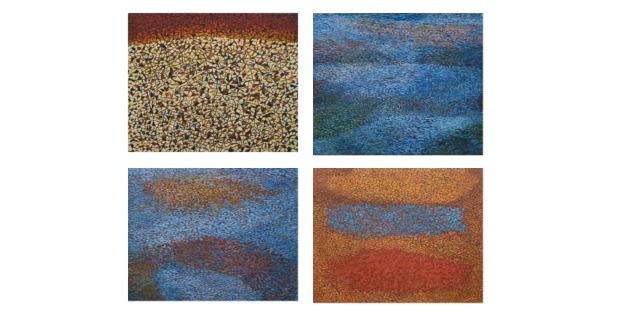 On show from 14 September at CICCIC Gallery are large colourful abstract paintings and works on paper by Nick Gray.
The paintings are based on ideas around movement, rhythm, and energy. Some have geometrical roots, others are more connected with nature and organic forms.
The paintings do not possess strong identifiable imagery, so enabling the mind to make its own connections and for the imagination to take flight. This is physical work with a tangible presence, but allows one to draw one’s own conclusions, and establish a personal relationship with the work.
There are also some dozen works on paper on show, people in public places inter- reacting, They are surreal, dreamlike and humorous. The strong colours and clearly defined imagery give them a strong and very particular impact. A show to be enjoyed. Do not miss it.

All members of the public should enjoy this exhibition of paintings by a highly respected and experienced artist.

The paintings do not possess strong identifiable imagery, so enabling the mind to make its own connections and for the imagination to take flight. This is physical work with a tangible presence, but allows one to draw one’s own conclusions, and establish a personal relationship with the work. 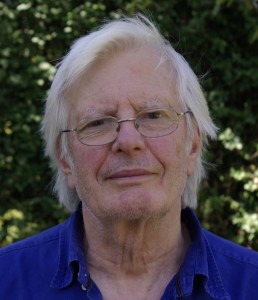 Nick Gray trained at the Central School of Arts and Crafts in the sixties when the only teachers were practising artists. He worked under Mervyn Peake, Cecil Collins, Alan Davie, and David
Haughton. Subsequently he studied with William Hayter in Paris on a French government scholarship. As a result of this he became one of Editions Alecto’s stable of artists, and through them sold prints to prestigious galleries and museums in America and Europe.
In 1965 he moved to the westcountry and started teaching part time at Exeter College of Art.
He was to stay with them for the next twenty five years. In 1966 he was a prize winner at Cracow Print Biennale.
In the late sixties Bridget Riley and Peter Sedgley set up the first communal artist studios in
St. Katherine’s Dock. Nick Gray was an early supporter of the scheme, later moving to Stepney Green. A number of shows and exhibitions in London were the result, plus more shows
In the westcountry where he was still teaching.
In 1977 he married and moved to Devon, and in 1981 became senior lecturer in painting at Exeter. Major one man shows at Spacex in 74 and 78 were reviewed in the Guardian. In 1985 he was appointed course leader for the combined honours language with fine art degree at University of Exeter.
In 1989 Nick Gray retired from full time teaching to concentrate more on his own work, but a few years later was lured back and is currently still teaching part time at Somerset College on the Fine Art BA course.
He continues to work in Exeter, and shows regularly in Devon and Somerset.
More about Nick at http://nickgray.isendyouthis.com/about.aspx

Exhibitions, Uncategorized
art, exhibition, gallery, painting
Previous Post
Using Your iPad for Business and Pleasure
Next Post
Arts and austerity – A debate ‘Can the arts remain part of civil society without public subsidy?’