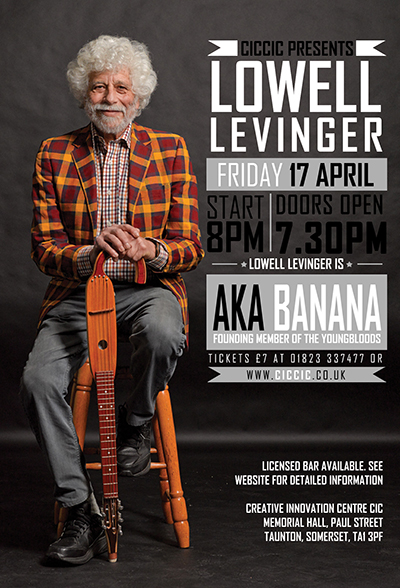 Tickets £7 online £9 on the door. Concession for over 65 and students £6 online and £8 on the door. Door open at 7.30pm for 8.00pm start.
Join us for a personal acoustic concert with one of the best musicians of the 60’s and other decades with Lowell Levinger aka “Banana” – founding member of The Youngbloods.
Lowell is stopping by from his home in America for this exclusive UK Tour and if you love all things guitar, banjo, folk, country and songs from his Youngblood days then this exclusive concert is just for you.

Banana’s infatuation with Americana music started in the early fifties growing up in Santa Rosa California when he discovered the ‘race station’ KWBR in Oakland and started hearing the likes of and buying the records of Lightning Hopkins, Jimmy Reed, John Lee Hooker, Big Bill Broonzy, Little Willie John, Lightning Hopkins, James Brown, and on and on. Then along came Chuck Berry and Ray Charles, and Little Richard and Fats Domino and Elvis and by that time he had learned enough piano to play with a group of local Philly style street corner singers called The Chandells. They got to go to LA to make a record but he was too young to go. He got hooked on guitar as a teen and then the banjo of Pete Seeger and The New Lost City Ramblers and then, just before heading off to Boston University, he heard Flatt and Scruggs for the first time. A life changing experience. One that added a permanent place in his heart and in his practice for bluegrass. 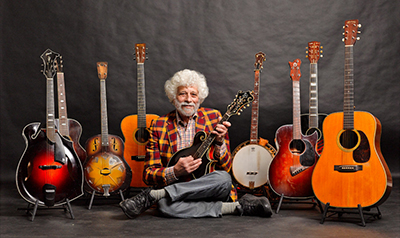 Along with co-producing The Youngbloods records with Joe Bauer and many others on his own, he produced the first two High Country albums for Butch Waller which were released by Warner Bros. Records in the early 1970’s. This introduced California bluegrass to a worldwide audience.
He was accompanist to Mimi Farina for over twenty years, played keyboards and sang lead with Zero for over 10 years, played with Norton Buffalo, Steve Kimock and Friends, The Michael Barclay Blues Band, Dan Hicks and his Hot Licks, and old time psychedelic rock with The Barry “The Fish” Melton band. He has done duo gigs with David Nelson, Keith Little, Paul Knight, and many others. And he plays the beloved bluegrass music with friends and neighbors including The Papermill Creek Rounders, David, Tracy and Sam Grisman,Jack Elliott, Peter Rowan and the legendary Artie Rose and associates.
“Get Together – Banana Recalls Youngbloods Classics” will be released this fall to commemorate the 50th anniversary of the founding of They Youngbloods. It is a collection of Banana’s arrangements of Youngbloods favorites with many guest artists including Ry Cooder, David Grisman, Darol Anger, Peter Stampfel, Duke Robbilard and plenty of others. The classy package includes a 20 page booklet.
[SINGLEEVENT single_event_id=”book-tickets-for-lowell-levinger-concert-1-551c082f86385″]