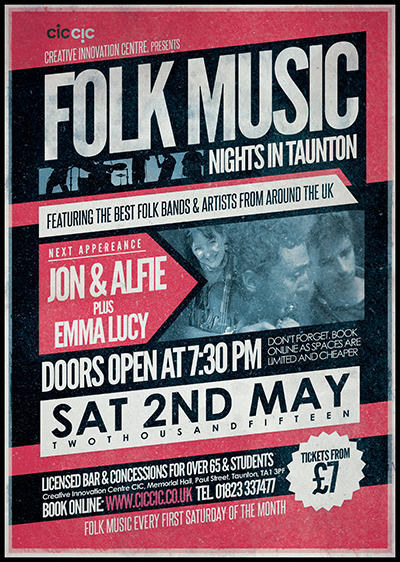 This amazing line-up of folk singers, musicians, songwriters and performers bring the whole folk music scene alive in Taunton on Saturday May 2nd and an excellent price for hearing from well seasoned artists from a range of folk genres, and all in the candle it atmosphere of CICCIC’s Memorial Hall.
We are very excited to have

Jon & Alfie are practising multi-instrumentalist folk musicians emanating from Cornwall. They arrange both original material and traditional folk tunes from all over the world with a distinctive and unique style.

Jon’s mischievously jazzy and adventurous flute and whistle melodies sit playfully atop the darkly sparkling thrum of Alfie’s guitar and various stringed instruments. Their arrangements are rhythmically charged, at once foot-stamping and unpredictable and their sound is experimental in its subtle questioning of folk music idioms. Their performance is guaranteed to put a twitch in your face and a grin on your toes! 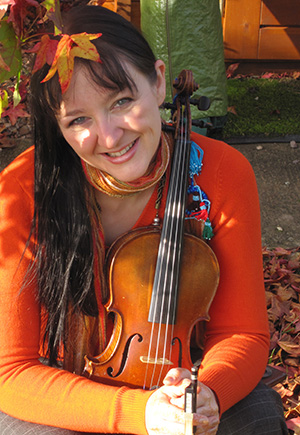 EmmaLucy is a bit of a nomad and after many years spent immersing herself in other cultures, playing music, learning languages and meeting camels, she has now returned home and is processing all of the wondrous experiences: from early days as a classical soloist and chamber musician; playing Arabic classics with the Arabesque Orchestra in Toronto; jamming with Moroccan Gnawa musicians in London; studying Bedouin folk tunes in the desert of Sinai and playing with some of the Middle East’s top musicians.
She currently plays her grandmother’s instrument, a violin which has travelled the world with her and still sings with a rich voice which has been known to move audiences to tears. Now based back in the UK, she plays old-time Cowboy music with ‘Alberta’, sessions for local folk and country groups and performs traditional Arabic , Gypsy and Mediterranean music. She has composed with international musicians from Norway and Jordan and is currently developing workshops in Arabic music and culture to offer to schools and colleges.
[SINGLEEVENT single_event_id=”book-tickets-for-folk-music-sat-2nd-may-1-552be5ca25227″]