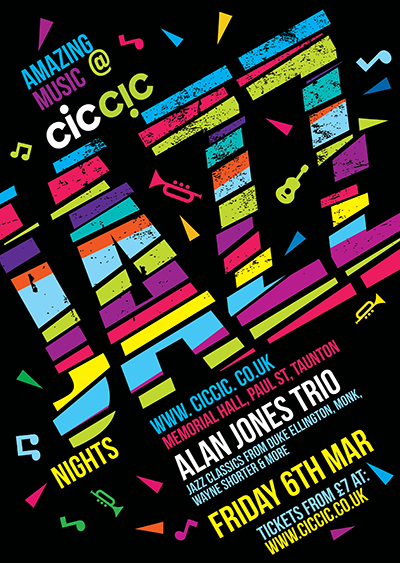 Friday 6th March 7.30pm-11:00pm. £8.00 or £7.00 concession if booked online, or £10 on the door with £9 concession.
Join us for amazing night of jazz with our visiting American friends and renowned musician and expert drummer Alan Jones and his quartet François Théberge & Will Harris.
Alan, Francois and Will have been playing together for 20+ years with many different bands, touring projects and recordings. This concert will be jazz classics from Duke Ellington, Monk, Wayne Shorter played with the conversational, storytelling ease of great friends who know each other’s music inside and out… catching up after not seeing each other for a time, enjoying the evening together, and sharing that with others in the candle lit atmosphere of CICCIC’s Memorial Hall. It will truly be a great night.

Alan Jones – Known for his vitality and groove, Alan Jones is a passionate mountain climber, builds his own drums, and plays barefoot. The Toronto Globe and Mail called his trio performance at the Top of the Senator with Phil Dwyer and Rodney Whittaker one of the “Top 10 moments in Canadian jazz.” 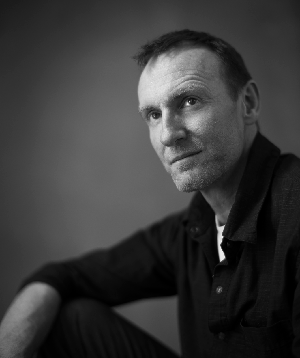 Born in Longview, Washington in 1962, Alan was raised in Portland, Oregon where at the age of 6 he began playing the drums and guitar. By 16 he was on the road with the notorious organist from Amsterdam, Count Dutch and Native American saxophonist Jim Pepper. Alan graduated from Berklee College of Music, studied with the master, Alan Dawson, and spent 2 summers at the Banff Center for the Fine Arts in Canada. Alan has learned drumset and brush technique at the feet of Elvin Jones, as taught the shuffle by Art Blakey and has gotten invaluable insight and advice from Tony Williams, Jaco Pastorius, Roy Haynes and Billy Higgins.
He has performed, toured and/or recorded in clubs, concert halls, festival and studios all over the world with a long list of some of the music’s greatest artists.
Alan has held positions at The American Institute of Music in Vienna, Austria (1990-1992) and at Portland State University (1993-Present).
Alan’s love and understanding of music and his ability to communicate, both as a player and a teacher led him to the creation of The Alan Jones Academy of Music. AJAM is an innovative education system focused on personal and collective improvisation from grade school through retirement, and prompted the city of Portland to honor him with an award for “Outstanding Achievement in Jazz”.
With a long recording life and accomplished musician it really is an honour to see this master at work. 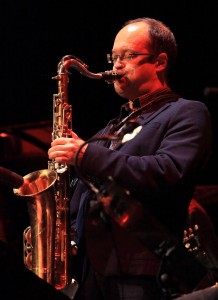 François Théberge – Saxophonist, composer and arranger born in Montreal Canada, on May 18th 1963 and was involved as a freelance musician in Montreal between 1980 and 1985 both as a writer and performer, he also studied saxophone and arranging.
In 1985 he was awarded the Canada Arts Council grant to study at the Eastman School of Music in Rochester N.Y. His next five years were spent in the USA studying and performing; In Rochester he earned a masters degree in jazz and contemporary medias, studying with Rayburn Wright and Bill Dobbins. He studied and performed in Miami Florida (University of Miami with Ron Miller and Gary Campbel). He toured as saxophonist and arranger with the Glenn Miller big band around the United States, Japan and Brazil for 14 months. In 1990, he was invited in France by the Orchestre Régional Rhône-Alpes (Grenoble) as guest conductor/lead saxophonist to coordinate their repertoire.
In 1991, he moved to Paris and involved himself in the jazz community. The artistic emulation in Paris lead him to meet many musicians from around the world. Besides co-leading his own big band in Paris, he became involved in various tours and recording projects around Europe. As a result of his important arranging activities in Europe, he was appointed professor of jazz arranging/composing at the National Conservatory of Music in Paris in 1995. His first recording as a leader (Asteur) featuring Horace Parlan on piano, was nominated in France for « best jazz album » in 1997 , and he was also nominated « best new talent » in 1998. In 1999, he was appointed conductor/composer of the European Jazz Youth Orchestra.
Since 2000 François has won more awards and completed multiple recordings in a range of jazz genres, band sizes and record labels.
Will Harris (Bass) – Will’s dynamic, versatile and comprehensive approach to the double bass guaranteed he has become an in-demand musician in the South West, having played with the likes of Bobby Wellins, Alan Barnes, David Newton, Tina May and Anita Wardell. His playing has taken him to venues and festivals across the UK including Brecon, Cheltenham and Oxford jazz festivals, as well as Glastonbury Festival. Recent studio work has included albums with the Andy Hague Quintet, Jake McMurchie (Get The Blessing) trio, Dom Franks’ Strayhorn, and singerEmily Wright’s Moonlight Saving Time. Will developed his skills as an arranger for the Hornstars big band, and now arranges for popular latin jazz band The Magnificent Seven. As well as running his own improvising workshops Will worked as a tutor on Nia Lynn’s songwriting summer school. Will was musical director of a big band on BBC Points West, and musical theatre work has taken him to the Theatre Royal Bath as well as London’s Soho Theatre and Arcola Theatre.
[SINGLEEVENT single_event_id=”book-tickets-for-alan-jones-trio-1-54e4a248b6a65″]