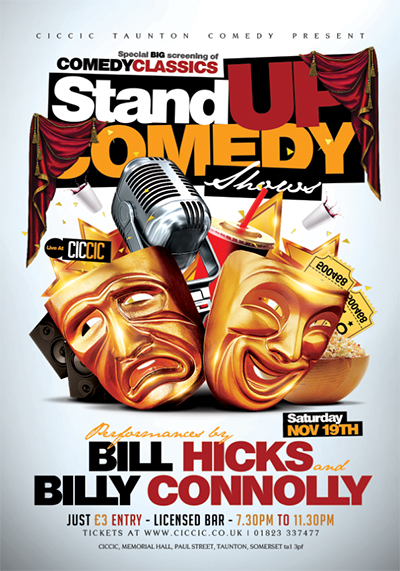 Join us anytime Sat 19th Nov 7.30pm – 11.30pm. Just £3pp.
Come along to CICCIC and see two amazing classic comedy stand-up concerts and experience why its so good to laugh with other people while enjoying drinks from our licensed bar. Plus with Bill Hicks and Billy Connolly in concert on our big screen you’ll be in stitches in no time.

About this ‘Live Comedy Standup’ Screening 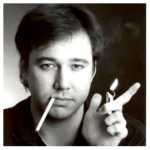 First up is Bill Hicks: Relentless (1992) where Bill Hicks tells us how he feels about non-smokers, blow-jobs, religion, war and peace, drugs and music.
The bespectacled, black-clad comic scrutinizes our hawkish government, right-wing religious institutions and prudish pop culture from a stage in Montreal — calm until something unbelievable prompts an outburst of righteous rage. His painfully clever excoriations of social shortsightedness and evaluations of missile-happy American soldiers in Gulf War I show off not only Hicks’ skill and patience in executing jokes, but also his foresightedness. He was a misanthropic moralist, who did his best to get to the bottom of religious hypocrisy, moral hypocrisy, and societal hypocrisy. But he also made you laugh when he did it. 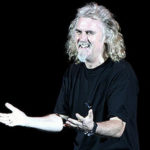 Second up is the classic An Audience With Billy Connolly (1985). Billy Connolly employs his trademark bawdy wit to tell a celebrity audience about his adventures in London and LA.
A leopard skin shirt, long hair and the ultimate highland dance are some of the highlights you’ll expect to see in this memorable performance from Billy Connolly. The Big Yin himself descends on London to entertain an audience of celebrities, delivering an unswerving performance in front of a packed studio full of stars. Enjoy a unique performance of outrageous comedy in this hilarious once-in-a-lifetime show. If you love Billy Connolly you’ll see him here as you’ve never seen him before.

Get Your Tickets Today

An Event with an ID of "8670" could not be found. Please contact the event administrator for assistance.
Archive, Uncategorized
cinema, comedy, Film, live performance, stand up, video
Previous Post
‘Head in the Clouds’ Practical painting workshop with Sara Dudman RWA.
Next Post
The Thunderbridge Bluegrass Boys – Fri 18th Nov