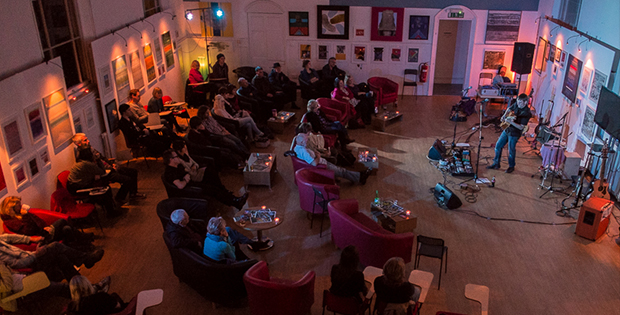 Saturday’s Acoustic Music Night at Taunton’s CICCIC once again delivered another eclectic showcasing of talented and inspiring musicians from across the South West, featuring the headliner Darren Hodge accompanied by Indie-Folk trio The Honeyfire and solo artists Lee Rahn and Ged Stephenson.

Ged began the evening with his eccentric mix of compelling yet often amusing compositions. Taking the audience through the stories behind the music, though expressing a view that we should decide the meanings of his songs for ourselves, Ged set a truly intimate atmosphere for the evening.
As the crowd’s final chant of Ged’s “One love, One world” radiated across the venue, The Honeyfire were next up. The three girls from Bristol transformed the tone of the evening with their dark and imaginative take on folk music. The beautifully textural instrumentation, including the playing of a saw, and seamlessly intermingling harmonies lulled the audience into a dedicated silence as they exhibited tracks from their debut album to be released this month on Jelli records.
Lee Rahn, returning from London to play his home county, was the next artist to feature exploring a remarkable range of tunings and percussion styles on his acoustic guitar, inspired by artists such as Nick Drake and Ben Howard. Lee’s calming vocals fitted perfectly with the atmosphere and acoustics of the venue and the highlight of his set came with poignant ‘Wild One/Once More’, the honesty and vulnerability of the composition expressing just how dedicated Rahn is to his crafting of music.
The finale of the evening came duly from Darren Hodge and though his set was met with a minor technical difficulty, his musical ability and passion for his playing shone through. Hodge’s set, an astounding exploration into the very limits of the acoustic guitar and collapsing the distinctions between original compositions and covers, ranged from versions of Incubus and Michael Jackson to Chet Atkins with Hodge also taking the time to showcase his vocal abilities.
The talent staged across the evening was truly astounding in scope, ability and passion and rightly expresses the terrific quality of music that is passing through Taunton. The next scheduled Acoustic Music Night at CICCIC is Saturday 31st January.
Written by: William Holt