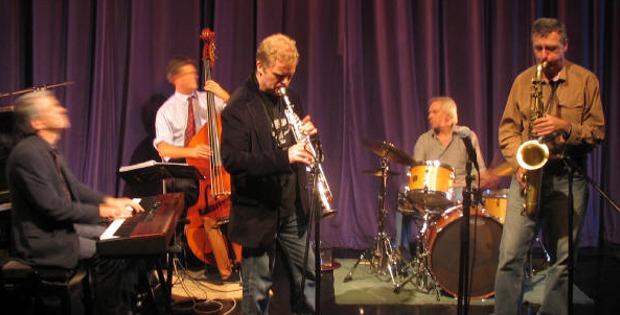 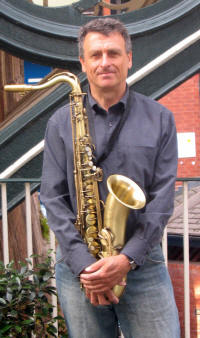 Pete Canter played on the London jazz scene of the 1980s before a spell in Wales and a move to the South West in 2001. Since then he has established himself on the UK jazz scene as a strong and lyrical player with an exquisite sound. He has recorded several albums under his own name including two albums of his own compositions. He has studied jazz composition with Iain Ballamy and also writes contemporary music. His musical activities are diverse and include playing drums and sax with experimental free improv group Get Rich Quick. He has played many major UK festivals including Cheltenham, Teignmouth and Bude Jazz Festivals as well as the Exeter Vibraphonic, Summer and Autumn Festivals, and the North Devon Festival. His bands have supported Polar Bear and Kyle Eastwood and he has played with Iain Ballamy, Christian Brewer, Harry Beckett, Ted Beament, and US trombonist Jim Fryer. 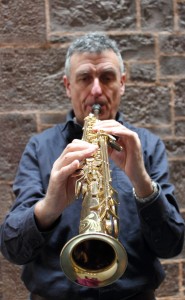 Since moving to Bristol in 1991, Jim Blomfield has become recognised as an exciting, versatile and engaging piano player. He has often been the pianist of choice to accompany some of the UK’s biggest jazz names as well as playing regularly with several of Bristol’s  best know jazz bands. As a bandleader and composer his work has included Latin Perspective, a sextet reflecting his affinity with Latin jazz/Salsa music  and Septimbre, a septet playing his intricate compositions as recorded on the album Peaks and Troughs. He currently leads his own trio and has recently released the album Wave Forms and Sea Changes. Jim plays piano on both of Pete’s albums of original composition Lightflight and Unumbium as well as an earlier compilation album So Far.
Jim Rintoul is a talented and versatile double bass player with a great sound and groove. Now based in the Southwest again where he grew up, he has played pop, soul and jazz all over the world with many different bands. He played and studied jazz bass in New York for two years and is also an accomplished classical player who performs regularly with several orchestras. He is quickly becoming established on the Southwest jazz scene as a bass player of choice.
Gary Evans has played drums from a tender age and is a listening and sensitive player. He has played with just about everyone on the Southwest music scene be they from rock bands, jazz combos or big bands. He too has toured the world playing on cruise ships and can turn his sticks to any style of playing. Gary features on Pete’s album Ununbium and has been a regular in the quartet for a number of years.