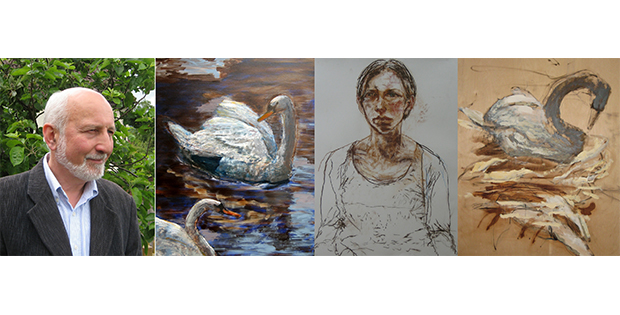 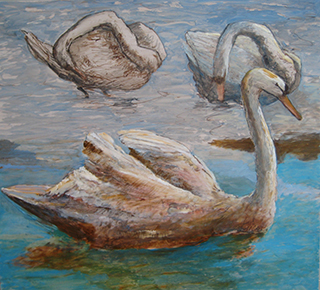 “Swans – Since 2005 I have painted mostly swans. I draw them as they preen themselves, as they push upriver or rest on the water.  As swans tend to keep moving the drawings are rapid. Now and again one of these little drawings will be the basis of a painting or a large pastel drawing. These are are generally life size.
Narrative and Portraits – Although each swan seems to be an actor in its own drama, these other subjects can be more complex and the sources are various. In most cases they are based on a more immediate drawing. One of them takes a martial pose from a nineteenth century engraving, another uses paused video and newspaper photo, another is taken from a mural in a church by Lake Garda.
Sketchbooks –  I fill many sketchbooks by looking directly at something, whether a swan, a landscape, a person, or a painting. They are a purchase on reality. When it comes to drawing from paintings I return most often to the National Gallery and settle again in front of Degas, Titian or Veronese.”

This exhibition will offer something for everybody – the work is figurative and the subjects appeal to everyone.

An appreciation of how a figurative artist works and where he obtains his inspiration. 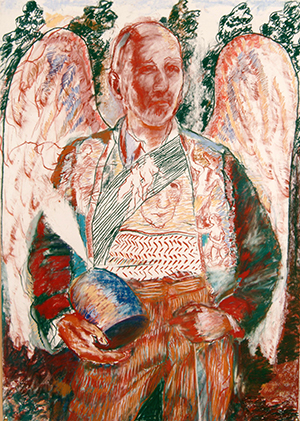 Peter grew up at the foot of the Quantock Hills. After studying in London, he returned to live in Somerset. Alongside painting, he has worked as a draughtsman, systems manager and business analyst. He is now painting full time.
Peter has exhibited extensively in the South West and in April 2014 his work was selected from almost 700 entries to appear alongside paintings by some of Britain’s leading pastel artists at The Pastel Society UK’s annual exhibition at Mall Galleries near Trafalgar Square.
The Pastel Society holds an open submission exhibition in central London each year. Founded in 1898, with historical membership including Walter Crane and Dame Laura Knight. Today the Society is well known for spanning figurative, abstract and experimental work in all types of dry media.
Associated Links
www.peterlazare.com