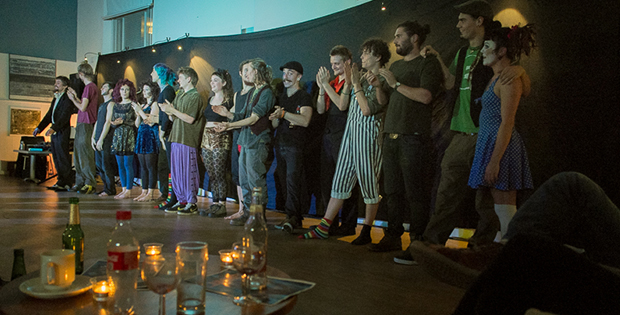 Performing at Taunton’s CICCIC on Friday evening, Pocket Fluff Productions presented a wonderfully talented ensemble of circus trickery, acrobatics and mesmerising poetry and music, their intimacy and dedication to their crafts captivating every member of the sold-out audience.
Introduced by the charismatic compare Jack as a “feast for all your senses” the show quickly launched into a classic slap-stick routine involving a rather large pair of dungarees and a scuffle over their ownership. Beginning the evening with this light comedy implied an atmosphere of family-friendly entertainment but then Pocket Fluff took it up a notch with an original, hilarious and rather explicit interpretation of Adam and Eve, involving donkey-noises and sneezing – Yes, it’s difficult to explain! 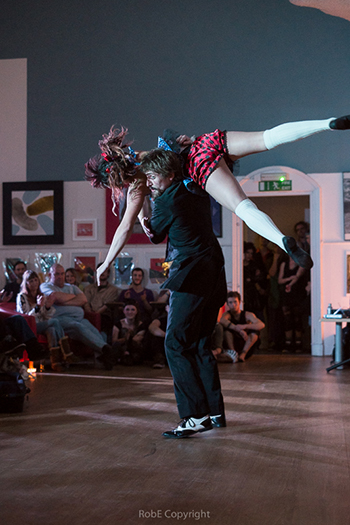 Composed of entertainers gathered from across the UK, including Bristol based performers Payaso Circus and a duo all the way from Shoreditch London, the variety was truly astounding throughout. The acrobatics showcased were a particular highlight involving some impressive hoop tricks, dance-routines and body lifts that kept the audience on edge.
However, what initially seemed to be an assortment of classic and humorous circus performances, the show rather chose to also confront deeper social issues. With the performance of poetry and music exploring topics such as unemployment and the effects of pornography on young people, the showcase became much more than just your average Cabaret night.
This unique performance comes as a fundraiser for the production’s founders, Harry and Kirsty (or rather Hairy and Krusty) in aiding their trip to America to attend an intensive circus school and judging by the quality and passion of their collaboration the duo and indeed the rest of performers all have big things to come.
Written by William Holt

Monkey’s Uncle – Jazz…and You Better Believe it!
OXJAM 2015- My First Time – A Review by Attendee