The Ronnie Jones Quartet – Jazz at its Finest 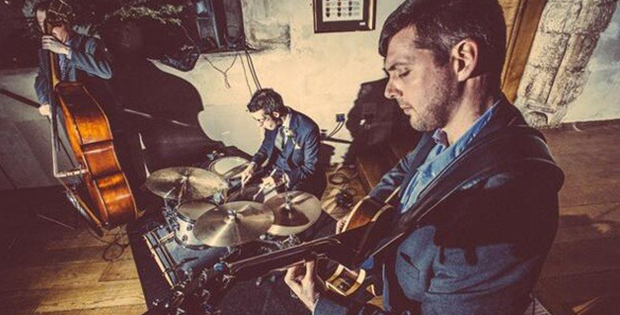 Thursday 14th August 2014. 7.30 – 11.00pm. £10 or £8 concession online or £10 or £8 concession on the door.
The Ronnie Jones Quartet is a band that you just have to see live.
They might be a quartet, but the band approach their music with the subtlety of a trio; delicately arranging their own take on some of the best music that the modern jazz repertoire has to offer – from percussion-fuelled Latin, to ballads as soft as a lullaby- focussing-in on the inherent tension and emotion in the pieces, leaving audiences in blissful contemplation.
The musicians in Ronnie’s quartet are all experienced players and have appeared everywhere from The Welsh Proms to the Teignmouth Jazz Festival.
The Ronnie Jones Quartet join us tonight hot off the back of a high-profile gig at London’s Ealing Jazz Festival, one of the biggest jazz festivals in Britain. It’s a real honour and privilege to have them play at CICCIC jazz nights. A must see.
So make August 14th your summer night out and chill out at the best music venue in Taunton.

The Ronnie Jones Quartet in Detail

Ronnie has been playing drums since he was 11 and had lessons from Bill Eyden for several years whilst at High School in West London.
Ronnie first started playing jazz whilst studying at Cardiff University. It was here that he also first appeared as a Latin Percussionist, regularly performing to hundreds of people with funk band Planet Janet. The band went on to play at high profile clubs on the jazz circuit such as Jagz in Ascot.
Ronnie still plays with some of the musicians from his student days, joining them to appear at The Welsh Proms in a new project called Kookamunga last summer.
After university, music took a back seat in Ronnie’s life for a few years as he devoted more of his time to his career as a broadcast journalist; but after moving from London to Devon in 2005, Ronnie refocused on his music and specifically his jazz drumming and immersed himself in the local jazz scene.
Ronnie is now an in demand drummer and percussionist and has played with some of the top jazz musicians in the South West including several appearances at the Teignmouth Jazz Festival and at Exeter’s Vibraphonic Festival (where he appeared on percussion with the Mike Westbrook Big Band).
Most recently Ronnie has been performing across Devon with Exeter saxophonist Pete Canter’s new Lightfight project and enjoying the novel experience of playing drums and percussion, at the same time. He liked it so much he’s brought his bongos with him tonight!
Now, in his 25th year of playing drums, Ronnie is thrilled to have fulfilled one of his long-held ambitions of forming his own jazz quartet.

Gary started playing the saxophone at 14 years old. He learned his craft in the Southampton big-bands and from the musicians of the trans-Atlantic liners passing through between New York and London. From jazz he moved into pop, playing with many international artists when he became the house saxophonist for the Mecca and Top Rank venues. Gary toured with several acclaimed funk bands before returning to jazz by blitzing the major festivals in a manner that brought him to the attention of jazz journals, national newspapers, and the BBC. He has appeared at the London Jazz Festival five times, Ronnie Scott’s and Pizza Express in London’s Soho, and broadcast live on BBC Radio. As a member of the legendary Mike Westbrook band their gigs are regularly tipped as ‘gig of the week’ in The Guardian.

After a misspent musical youth playing drums and guitar in bands covering The Undertones and Dr Feelgood, David discovered his musical vocation after picking up an upright bass for the first time at a Dartington Hall summer school. Gaining a jazz education at the now legendary workshops run by Totnes Jazz Collective, he went on to play regularly at the Collective’s gigs and with groups convened by several of its members including Lewis Riley and Sam Richards. An enthusiast for all kinds of jazz, as well as working regularly with Ronnie and Joss in duo and trio formats he also plays for the nine-piece band Ellingtonia which has appeared at festivals across the South West including Teignmouth, Bude and Dartmouth; and for AJ’s Big Band which specialises in the music of another colossus of jazz: Glenn Miller.

Joss was born in a small town on the west coast of Scotland and moved to Glasgow at an early age. It was here that Joss started to take an interest in jazz, becoming involved with jazz workshops and big band at the Glasgow Arts Centre and performing with the National Youth Jazz Orchestra of Scotland.
Aged seventeen Joss moved to London to study Jazz at university. He was taught harmony and theory by the likes of Pete Churchill (Jazz Education award 2007) and Nikki Iles (Jazz Education award nominee 2007 & 2009) had guitar tuition under the guidance of multi-instrumentalist Stuart Hall and Phil Robson (Winner of ‘Best Jazz musician of the Year’ in 2009) and developed his performance skills under founding member of Loose Tubes and jazz educator – trumpeter Chris Bachelor.
After graduating with an honours degree in Jazz (BA Music) Joss stayed in London for several years working professionally before studying for a Post Graduate Certificate in Education (PGCE) and moving to Devon where he still resides. Joss now teaches Music part time at a local secondary school while continuing to gig with some of the top musicians in the South West.