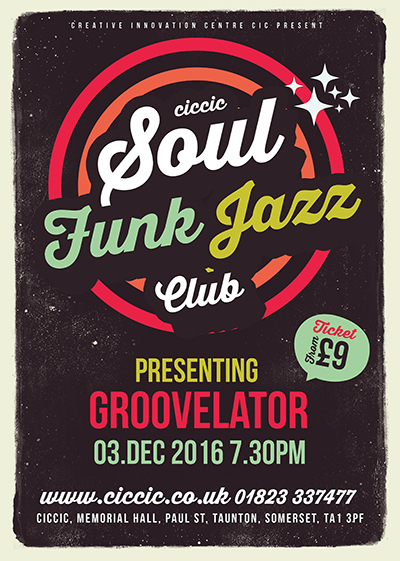 If you think you have heard an expert organist with talents that burst from the unique sounds of a Hammond Organ then this exciting and exclusive music event with band Groovelator will amaze you with talent and sounds so abundant with groves you will step into a world of pure musicianship.

Expert band ‘Groovelator’ finds freedom and elation in the groove. The band features virtuosic Hammond Organist John Paul Gard, Tom Gilkes on drums and Mark Lawrence on guitar with repertoire taken from funk and soul classics, pop hits, sizzlin’ fusion, gospel and jazz.
John Paul Gard studied at Coventry University where tutors included Jason Rebello and Dave Buxton. He performed with Andreas Öberg at the IGG Festival, has appeared with Alex Hutchings at Musikmesse and Glastonbury Festival and is well known for his work with Eddie Martin, Mike Britton and Esmond Selwyn across the United Kingdom and in Europe. John Paul is endorsed by The KEYB Organ Group and the Ketron Music Group. 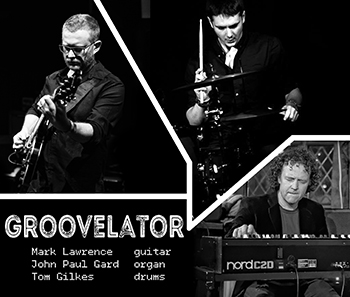 Mark Lawrence has a playing style of “vocalising guitar that hints at Hendrix via George Benson” and has performed at various festivals and club dates in the UK including the London Jazz Festival, The Vortex, Bristol Harbour Festival, ‘Secret Garden Party’ and at Oxford, Cheltenham, Teignmouth and Bude Jazz Festivals.
Tom Gilkes has studied with a who’s who of rhythm masters including Dave Dicenso, Aaron Comess, Dave Weckl, Mark Pusey, Jason Bowld and Robert Brian. Tom is a graduate of BIMM and performs regularly the the U.K and Europe with Eddie Martin, Monkey Chuckle, Elles Bailey and many others. Notable other live and recording credits include Glastonbury, the Bristol Jazz and Blues festival, support for Brother Strut, working with producer Clint Murphy and Brian Banks (who performed on Michael Jackson’s Thriller album).”

An Event with an ID of "8869" could not be found. Please contact the event administrator for assistance.