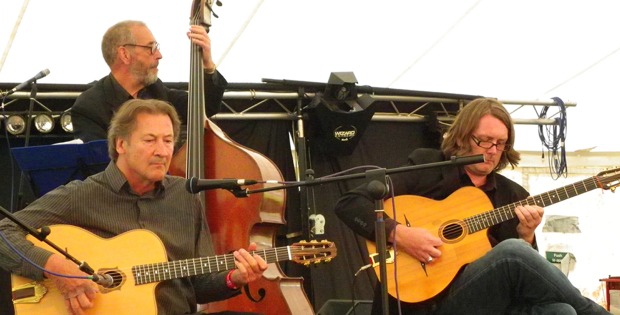 Dave Lunniss became well known as one half of Boulevard Django and guitarist with Swing 39. He has appeared at several major UK festivals, performed at Glastonbury Festival three times, the Cork and Kinsale festivals, in Ireland and the Silkeborg Riverboat Jazz Festival in Denmark.
Bass player, Tony Bevir with Le Jazz appeared on a major European tour, with the great gypsy jazz guitarist, Fapy Lafertin, from which came two now legendary recordings, Hungaria and Swing Guitars.
Toby Morgan, Solo Guitarist has played with bands, including , Piaffinitee, Shine, Appel Direct, Swingology and Chez la vie. The sound of Django Reinhardt’s music had a profound effect on Toby and since then he has been studying and playing Swing Manouche.
Toby studied music at the prestigious Dartington College of Arts, going on to teach guitar there from 2004 until the present (following it’s merger with Falmouth University). He divides his time between Gypsy Jazz performances, private guitar lessons and University lecturing.  He has appeared at various prestigious UK Jazz Festivals as well as The Django Reinhardt Memorial Festival in Samois sur Seine.
[SINGLEEVENT single_event_id=”book-tickets-for-trio-manouche-1-530f0b7567a42″]