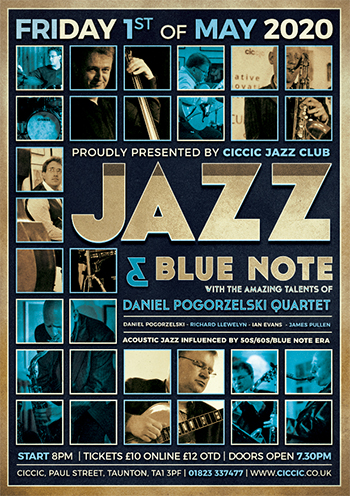 Daniel Pogorzelski
Tenor and soprano saxophone player. Professional woodwind instrument technician, and jazz maniac as his friends called him. In truth, he can honestly admit to fall in love with jazz many years ago. In the past being involved with some fusion jazz projects and avanguard experiments. Nowadays plays with big bands, New Orlean influenced street music (LittleBigHorns), jazz fusion projects and enjoying very exciting project with his DPQ quartet.

Ian Evans
A Professional drummer and percussionist from the South West. Starting his playing career at the tender age of 3, he has spent many years honing his musical skills with various outfits including his own ensemble, Apollo Jazz, at Bath Spa University and during a stint with NYJO. He prides himself on being versatile and always using his ear. He loves playing most styles of music but jazz, latin and funk are his favourites. Ian is proud to be a Roland Teacher Ambassador and JHS KeyPlayer.”

Jim (James) Pullen
Based in Weston super Mare in Somerset playing double bass, bass guitars and trombone along with band and orchestral conducting, arranging and composing. Jim currently holds the MD and bass chair with the Boulevard Big Band and also plays with the 12 piece brass group Bold Brass. Jim is also currently the MD of the North Somerset Community Brass Band Do peer into orchestral pits if you visit the theatre, you might just see Jim there. Jim has played professionally since the age of 19 and has been lucky enough to have toured the world playing concerts and gigs from Hong Kong to Las Vegas and Japan to Africa. Jim joined the RAF as a Musician of which most of his time in the mob was spent with the Central Band the Sqadronaires Big Band.