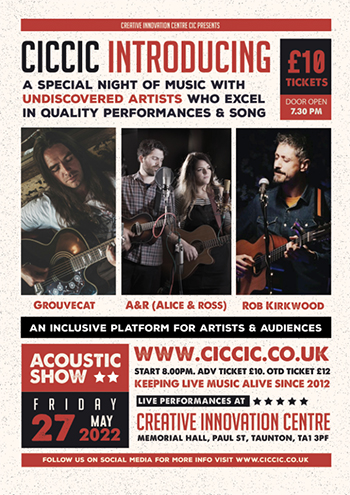 CICCIC Introducing is the same concept as BBC Introducing where we provide a special night of music with undiscovered or unknown artists who excel in quality performances & song. Allowing you as the audience to discover new or unknown local talent that we know will grow beyond the South West and on to the national circuit.

We have the pleasure of presenting the amazing talents of:

Rob moved to the South West from the Brighton area with his family back in early 2021. Rob has been playing music since his teens – mainly as a bassist from indie bands to gypsy jazz trios and anything between. Alongside this, Rob has continued developing as a singer-songwriter.

Following quite a stretch of time where Rob found himself swallowed up by the usual work and family commitments, the last couple of years has seen a new creative burst. Rob has emerged from the belly of the beast with a bunch of new well-crafted songs full of heart, some humour and a determination to get them out into the world…starting with Somerset.

Rob will be performing original guitar-based songs with a splash of harmonica. Rob’s rhythmic, folk-based style has been likened to Jack Johnson and Paul Simon. Although Rob’s adamant he doesn’t sound like either of them. 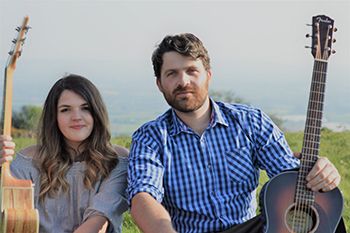 A&R are Alice and Ross, an acoustic duo with a love of putting their own spin on a classic cover. Expect gorgeous harmonies and arrangements that push the boundaries of what a duo can sound like.

They choose freely from any genre or mood to craft sets that take you on a journey. Equally at home singing you down the aisle at your wedding or rocking out at your local, Alice and Ross have been playing together for years and it shows in there musical bond and love for playing together. 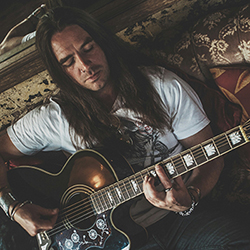 We are cheating a little bit here as Grouvecat isn’t unknow to us but as a local acoustic rock performer, whom we love, we wanted to introduce his extensive talents to our audiences.

Grouvecat has been performing in Solo/Band’s for 20 Years around the South Coast travelling around Europe & now the South West. He has performed in front of Thousands of people and been seen on TV.

With an acoustic rock-rock guitar repertoire and an amazing guitar sets with to-die-for vocals, Grouvecat always creates a brilliant atmosphere. He is versatile, creative, passionate & must see performing live.