It is with regret that this event has been cancelled due to unforeseen circumstances. Ticket holders will be notified. We apologise for the inconvenience. 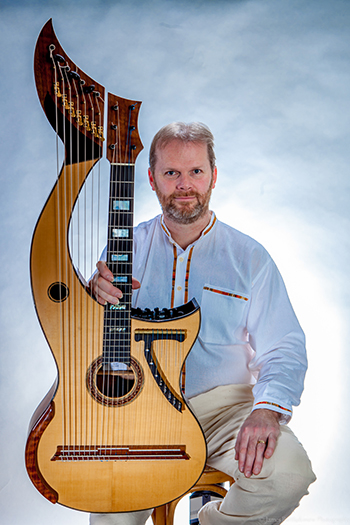 Prepared to be astounded at CICCIC’s Sunday Concerts with this exclusive classical guitar concert with amazing talents of Jon Pickard, who will delight you with a truly unique listening experience and performance with classical guitars and an amazing and very rare instrument – a 23 string ‘Harp Guitar.’ This wonderful instrument has to be seen and heard to be believed!

Harp Guitars can have any combination of fretted and un-fretted strings and have been around for many centuries – longer than 6 string guitars in fact, and have a rich and varied but elusive history all across the globe. They have a sound all of their own – bigger, richer and more resonant than any ‘normal’ guitar – and a wider range with lower sub-basses and higher super-trebles. The extra strings open up new worlds of musical possibilities and sonic scope.

Jon composes new and original music for Harp Guitar and as a composer he draws inspiration from people, events and places he has known and tend to write in a semi impressionistic way, often trying to capture the mood or spirit of a particular place or person.

Expect to hear a journey of different classical Spanish, Latin and modern classical songs that will lift life, enlighten and bring joy. 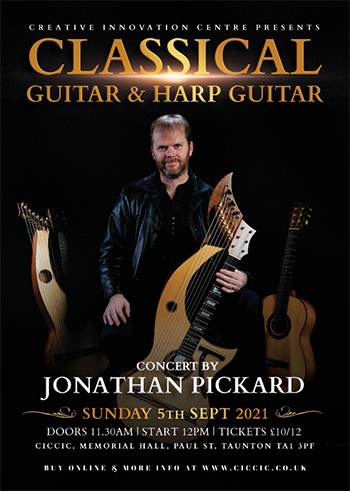 Jonathan Pickard is a professional Guitarist and Pianist, specialising in performances for concerts and all live events. He has done this for over 25 years. He has developed a busy career specializing in Classical, Spanish, Flamenco and Latin Guitar styles but is also known for his many arrangements of modern Pop tunes for the 6 string guitar.

He was trained to a First Class BA degree in Classical guitar and Jazz piano at Bath Spa University by teachers from London Trinity College, and has had many years of private tuition and masterclasses from world renowned players such as John Mills, Xuefei Yang and Terence Latham, to name just a few.

Jon designed and commissioned his own 23 stringed Harp Guitar and now composes and performs his own original music for it, as well as other Harp Guitar composers’ works, and arranging other music for the instrument.

Jon has also played Jazz piano professionally for around 30 years. He has countless musical influences (too many to mention them all) but the main current ones for Spanish and Flamenco guitar would have to be: Paco de Lucia, Vicente Amigo, John Williams, Julian Bream, Gypsy Kings, Ramon Montoya, Gerardo Nuñez, Paco Peña, Juan Serrano. Also Rodrigo and Gabriella, Jorge Morel, Paulo Bellinati, Astor Piazzolla and many more. He also loves Brazilian and South American Guitar music, including some Tango music and has studied and learned much from these genres.