Join us for a magical journey of top quality classical music and other tunes with the delightful and professional flute trio Flute Cake. A daytime concert not to be missed.

A Felicity of Flutes with Flute Cake 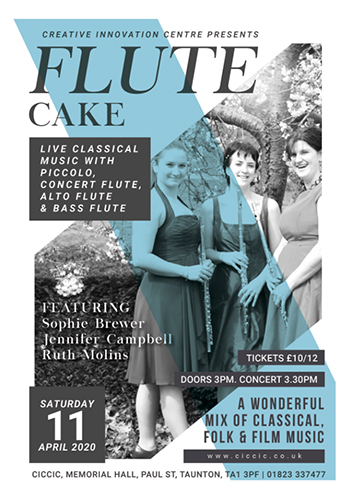 Flute Cake present a programme of well-loved music, re-imagined for the whole flute family: piccolo, concert flute, alto flute and bass flute. For the past six years, Sophie Brewer, Jennifer Campbell and Ruth Molins have taken their Flute Cake magic to venues across the South West. As individuals, they have performed in orchestras, as soloists, in pit bands and as recitalists. Together, as Flute Cake, they are well known for their engaging style, fantastic flute playing and imaginative original arrangements. 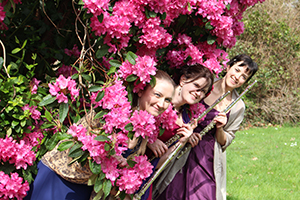 Ruth Molins: Ruth has over 10 years experience of playing in all sorts of ensembles in the South West of the UK: orchestras, improvising, contemporary, baroque, musical theatre. Ruth was invited to perform as a soloist with Exeter Symphony Orchestra in 2012 (Rutter, Suite Antique) and again with Sally Jenkins (harp) in 2015 (Mozart, Concerto for Flute and Harp). She has performed and championed new music and music by female composers on Phonic FM, Soundart Radio, BBC Radio Devon and BBC Radio 3. Ruth studied flute with Susan Buckland whilst at Cardiff University pursuing a joint honours degree in Music and English Literature. Ruth has performed in masterclasses with Jonathan Snowden, Anna Noakes and Michael Cox. After university Ruth further refined her technique with lessons from Michael Cox and Susie Hodder-Williams, expanding her repertoire and also developing orchestral technique (attending an orchestral flute course at The Royal Conservatoire of Scotland).

Sophie Brewer: Since childhood Sophie has led a very musical life, being involved in award winning ensembles, receiving music scholarships for specialist music schools and performing in small and large scale concerts across the globe. She studied music at Exeter University, and continues to study flute with Judith Hall, achieving distinction in her LTCL diploma. Sophie continues to perform locally on both flute and violin both as a soloist and as part of various orchestras and groups including principal flute in Exeter Symphony Orchestra.

Jennifer Campbell: An instrument technician for the Devon Music Service. She can mostly be found either taking instruments apart or playing them in theatre pits across the South West. Jennifer lives in Cullompton and plays with various ensembles in Devon & Somerset including Exeter Music Group and the Taunton-based saxophone octet Reed Rage. She also helps with local Kentisbeare Children’s Orchestra where she sits with the woodwind section and hopefully manages to offer encouragement and inspiration to upcoming young players! She arranges 99% of our repertoire for us.

Take a Preview of this amazing concert: