CICCIC Jazz Club presents some of the best jazz players in the UK and on Sun 26th Aug we have piano/keys, guitar and bass trio Newton’s Toad with many more amazing bands to come. 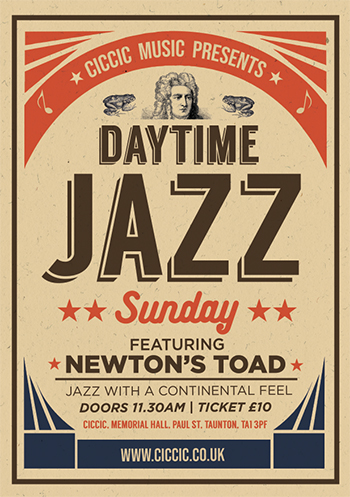 Newton’s Toad provide Jazz with a continental feel, some Bossa Nova, some Tango and Swinging Sounds. Newton’s Toad are:-

Hywel Davies has played in the South West jazz scene for more than twenty years, hosting residencies that featured players such as Stan Sulzmann, John Barton, Pete Judge – as well as leading his own groups.

Richard Llewelyn was brought up in a music loving household and began playing the guitar aged 7. Having worked in education he now spends his time making music as much as possible and plays with several bands.

Ron Phelan studied bass in Dublin before moving to the UK. He regularly plays with some of the best jazz musicians and improvisors in the South West.