There are some players that simply define the artistry and unique translation of musical instrument and jazz compositions to a high standard and CICCIC has the pleasure to be hosting critically acclaimed saxophonist and winner of the prestigious  British Jazz Awards saxophone awardee Simon Spillett, supported by the amazing Ronnie Jones Trio. 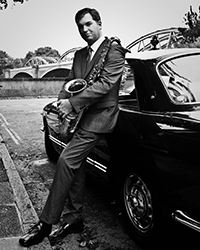 Simon has played with the leading lights of British jazz throughout his career including Sir John Dankworth, Stan Tracey, Peter King and The Ronnie Scott’s Jazz Orchestra.

Simon’s concert and club appearances across Britain have included sold-out gigs at Ronnie Scott’s and the Brecon Jazz Festival. He has also broadcast on BBC Radio 3’s Jazz-Line Up with his own band.

Simon is also a respected writer and the biographer of saxophone and vibe legend Tubby Hayes. Simon is regarded as the leading interpreter of his music. 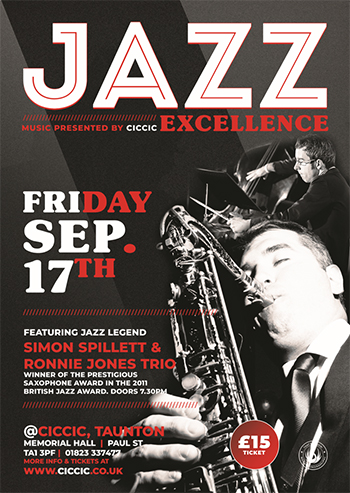 Joining forces with Ronnie and his trio for the second time on tour, Simon will perform a selection of modern jazz tunes with the band before they go on to perform their own repertoire as a trio.

Formed in 2011, the Ronnie Jones trio is well-known on the thriving South West jazz circuit with past performances at Cheltenham, Marlborough, Plymouth and Teignmouth jazz festivals; plus jazz venues across the region and beyond – including Ealing Jazz festival.

Band leader Ronnie Jones combines drumming with his other life as a podcast producer and broadcast journalist. Ronnie is an in-demand session jazz drummer and percussionist with appearances on BBC 6 Music, BBC Radio Wales, BBC Radio Cymru and S4C. He has toured the region with leading British jazz musicians and has performed at the Welsh Proms, the National Eisteddfod and Brecon Jazz Festival.
Guitarist Joss Kidd is an alumnus of The National Youth Jazz Orchestra of Scotland and a graduate of the BA Jazz course at Middlesex University.

Well-regarded double bass player Jim Rintoul completes the line-up. Jim has played electric and double bass around the world for the last 20 plus years and is one of the most sought-after players in the South West. He played professionally in Japan for seven years, before touring Australia with the legendary Drifters. Jim has studied with world famous jazz bass players in New York.