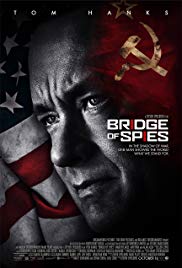 During the Cold War, an American lawyer is recruited to defend an arrested Soviet spy in court, and then help the CIA facilitate an exchange of the spy for the Soviet captured American U2 spy plane pilot, Francis Gary Powers.

In the cold war, a lawyer, James B. Donovan is recruited by the CIA and involved in an intense negotiation mission to release and exchange a CIA U-2 spy-plane pilot, Francis G. Powers. The pilot was arrested alive after his plane was shot down by the Soviet Union during a mission and stays in the company of a KGB intelligence officer, Rudolf Abel, who was arrested for espionage in the US