Come and enjoy an amazing Sunday lunch time jazz concert with the amazing Sarah Griffiths Project, who will delight your ears and emotions with some of the great vocal jazz songs of the 20th century. From traditional classics to famous songs that made the genre so popular. Accompanied by great music and the odd storytelling you will leave delighted and refreshed for the week ahead. 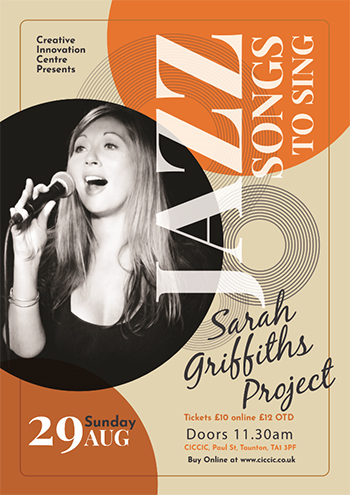 Sarah Griffith
Sarah has been singing Jazz and her own songs for 10 years, playing with some of the South West’s top musicians. Her background is in theatre and acting; she was in London’s West-End in various shows including ‘Don’t Dress for Dinner’ at the Apollo and Duchess theatres. Sarah loves to find the story behind the song and bring a little theatre to the stage.

Richard Llewelyn
Brought up in a music loving household, Richard began playing the guitar aged 7. Having worked in education he now spends his time making music as much as possible and plays with several outfits-Newton’s Toad, Daniel Pogorzelski Quartet, Sarah Griffiths Project and Tony Roberts to name but 4.

Ron Phelan
Ron studied bass in Dublin before moving to the UK. He regularly plays with some of the best jazz musicians and improvisors in the South West.