Unfortunately this event has been cancelled. we would hope to book the band here at Ciccic sometime in 2020.

Icarus Peel’s Acid Reign supporting The Honey Pot: the sound of the Psychedelic sixties brought up to date! 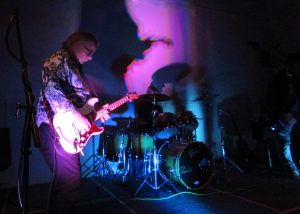 First there was The Honey Pot. This 5 piece band was started in 2012 as a response to the positive reception that the Icarus Peel instigated CD generated. The disc proved so popular that he was asked to play gigs and, the disc having been produced by he a drummer and a singer or two, so the real Honey Pot developed. They were signed by Mega Dodo Records and produced the first fully formed band album Inside The Whale on vinyl and CD.  The Honey Pot have recently released a new album of originals, Bewildered Jane, which R2 magazine described as  “..an idyllic 60’s technicolour dream, one that feels more vivid than ever, in which they’ve accentuated every colour in a multi-layered phantasmagoria of light.”

The ethos of the band is “With you head in the 60’s and your feet in the present day” and the emphasis is on strong songwriting as well as instrumental exploration and jamming. Main singer is Crystal Jacqueline, who has a very succesfull solo career as well. She has the best voice in modern psyche and plays keyboards. Further keys are provided by John Wyatt who covers a host of diversity from moog to piano. Icarus Peel is on guitar, more on whom later. Andy Budge, “The big throb” handles bass with dexterity, flipping between pulsing undercurrents to delicate decoration. New drummer is Jay Robertson who has fitted in perfectly with a wonderful understanding of light and shade.

The band has played all over the country, headlining festivals in Derbyshire and London. They have recently been asked to play at the open day for the Cern Hadron Collider in Geneva!! That should be fun…

Icarus Peel’s Acid Reign grew from a comment often heard at gigs, ” we want more guitar!”. Next the name came and then the band. It is a trio consisting of Peel on guitar and vocals, Budge on Bass and Jay on drums. And guitartastic it is too, bringing to mind The Cream, Taste and most often The Experience. The freedom found in the constantly evolving instrumental parts of the songs gives all three members the chance to stretch out and improvise. But this is not at the cost of a good song, again songwriting is essential to the band.

So get yourself out to Poundisford Park for what promises to be a fantastic evening of groovy music from some of the finest musicians in the West Country!