It is with regret that this event has been cancelled due to unforeseen circumstances and we hope to reschedule at a later date. All ticket holders have been notified and we apologise for the inconvenience. 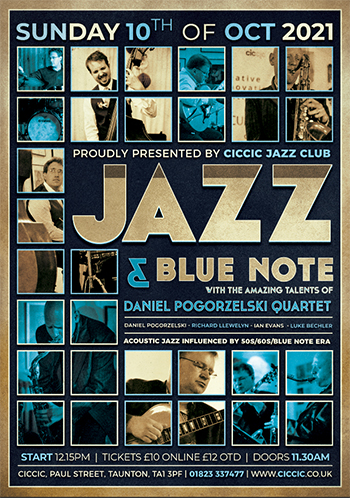 Daniel Pogorzelski
Tenor and soprano saxophone player. Professional woodwind instrument technician, and jazz maniac as his friends called him. In truth, he can honestly admit to fall in love with jazz many years ago. In the past being involved with some fusion jazz projects and avanguard experiments. Nowadays plays with big bands, New Orlean influenced street music (LittleBigHorns), jazz fusion projects and enjoying very exciting project with his DPQ quartet.

Ian Evans
A Professional drummer and percussionist from the South West. Starting his playing career at the tender age of 3, he has spent many years honing his musical skills with various outfits including his own ensemble, Apollo Jazz, at Bath Spa University and during a stint with NYJO. He prides himself on being versatile and always using his ear. He loves playing most styles of music but jazz, latin and funk are his favourites. Ian is proud to be a Roland Teacher Ambassador and JHS KeyPlayer.”

Luke Bechler
Luke is a New Zealand born bass player who took up the bass guitar at age 13 by chance when copying a friend who was signing up for lessons. At the time Luke did not know what a bass was but soon fell in love with the instrument. After developing a passion for jazz music, Luke went on to study jazz upright bass at the Christchurch Jazz School. Since moving to the UK Luke has become a household name on the Somerset scene playing with many of Somerset’s finest.