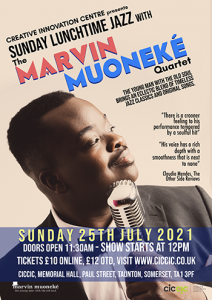 Marvin Muoneké dubs himself as ‘The Young Man with The Old Soul” and once you hear his voice and style, you’ll understand why.

Born and raised in Newham, East London, Marvin is a gifted jazz singer, songwriter, arranger and producer with a voice that Debbie McGee (wife of the late, great Paul Daniels) once referred to as rich, deep and wonderful; a voice that is heavily influenced by the likes of Nat ‘King’ Cole, Paul Robeson, Billy Eckstine, Frank Sinatra, Ella Fitzgerald and Mel Tormé, to name but a few.

In addition to his singing, Marvin also writes his own songs in the traditional style of the legendary songwriters of the Great American Songbook and he is also an extremely seasoned arranger, creating arrangements of his own songs as well as other well-known standards. In 2017 Marvin graduated with a BA in Professional Music Performance and Production at Bath Spa University.

Marvin appeared as a hopeful contestant on The Voice UK in 2016 and more recently as a semi-finalist on Britain’s Got Talent in 2018, and since then, in addition to performing to hundreds of people at various nightclubs and theatres throughout his career, Marvin has risen to take his place as one of the most renowned and in-demand vocalists in the South West of England.