Join us for a top quality evening with music legend Chris Jagger and Elliet Mackrell as Chris will read from his new autobiography plus Q and A. After Chris & Elliet will play some songs from the new album ‘Mixing up Medicine’. 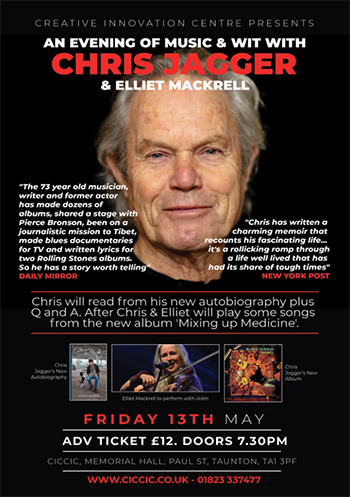 Last September Chris Jagger released his memoir titled, ’Talking to Myself’ and a record ‘Mixing up the Medicine’ both of which have had excellent reviews in the press in the UK and the USA.

Mixing Up The Medicine is a joyful, life-enhancing album by a man well versed in a whole range of musical styles, distilled into 10 tight tracks.

And in Talking to Myself Chris lifts the lid on one of the most colourful and exotic periods in British cultural history, from the bombsites and ration books of post-war Dartford to life as an insider weaving through the glittery underground of late 1960s countercultural London.

“Chris has written a charming memoir that recounts his fascinating life which included stints as a journalist, actor and musician….a rollicking romp through a life well lived that has had its share of tough times” NY Post.

Chris will read excerpts from his book and spice up the proceedings with a few tunes on his guitar. Sounds sonically interesting!

Chris Jagger is the younger brother of rock star Mick Jagger and here is one of his latest songs featuring Mick Jagger ‘Anyone Seen My Heart?’

CICCIC director Andrew Knutt loves much of Chris Jagger’s music and wanted to feature one of his favourite songs that Chris has written and that is ‘Hey Brother’:

This exclusive event has limited seating so book early to avoid disappointment.