It is with regret that this event has been cancelled due to unforeseen circumstances. We apologise for the inconvenience.

A journey through the American Jazz standards and the Latin Rhythms of Bossa Nova. 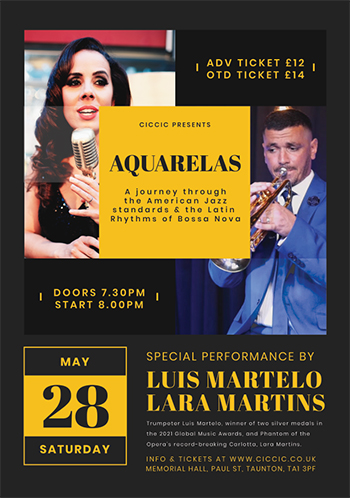 Just like a watercolour uses paint that is mixed in water to create a paler and delicate picture, so did the creators of Bossa Nova in the 50st. By combining traditional Brazilian music and rhythms with the American Jazz Standards, Carlos Jobim and João Gilberto, created these mellow and sensual melodies that reached world wide fame.

Luis Martelo, Portuguese Trumpeter based in England, is a former Portuguese Army Symphonic Band trumpeter, studied Classical Trumpet at the Coimbra Music Conservatoire and the University of Évora and with some of the world’s greatest musicians. Luis is a Lecturer in many Brass conferences and Teaches Masterclasses paired with his Solo Tours with his own Band or as a guest with different orchestras around the world, having performed in 9 different countries. Luis records for many artists and movie soundtracks including recently to the Hollywood producer Scott Fivelson. Luis’ album “All of Me” won the Silver Medal in the category of Jazz at the Global Music Awards, and Luis Won the Silver Medal as world’s 2nd best Emerging Artist 2021 His versatility, unique sound and character make him one of the new generation most acclaimed trumpeters.

Lara Martins is a singer and actor whose international success lies both on technical mastery and creative artistry. She has experienced equal success on the recital, opera and musical theatre stages, with the latter seeing her as the longest serving Carlotta Gudicelli in the history of Andrew Lloyd Webber’s “The Phantom of the Opera” in the West End.

Lara Martins has won the Donizetti Prize of the Jaumme Aragall International Singing Competition (SP), the 1st Prize of the Estoril Music Performance Competition / El Corte Inglés Award (PT) and the Anne Wyburd Prize at the Guildhall School of Music and Drama (UK). She has performed under baton of some of the greatest contemporary conductors and in some of the most renowned European stages Whether singing opera, lieder, Broadway tunes or songs from the movies, the critics are unanimous in praising her. The Observer, The Times and many other newspapers from across the globe agree that Lara Martins is “a world-class singer”.