British Folk-Rock group Julie July Band perform at CICCIC and a real a major coup to get such a prestigious vocalist and band to perform at our arts centre. 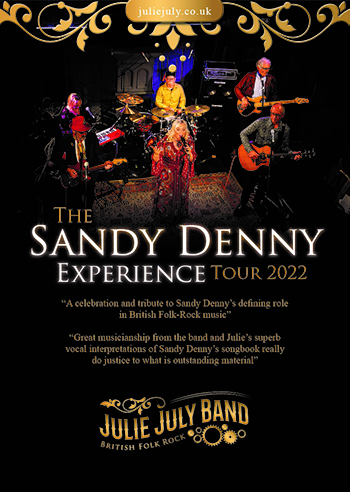 A celebration and tribute to Sandy Denny’s defining role in British Folk-Rock Music. Julie July Band make their debut performance at CIC Arts Centre, Taunton. They have built a substantial reputation with reinterpretations and arrangements of the work of singer-songwriter Sandy Denny. In Sandy’s brief career she left a legacy of beautiful, haunting original and traditional compositions. Richard Thompson called her – The greatest artist of her generation. Inspired by Sandy’s work and the wider folk, rock and blues movements of the Sixties and Seventies. The band will also perform songs from their own self-penned Albums ‘Lady of the First Light’ and ‘Wonderland’.