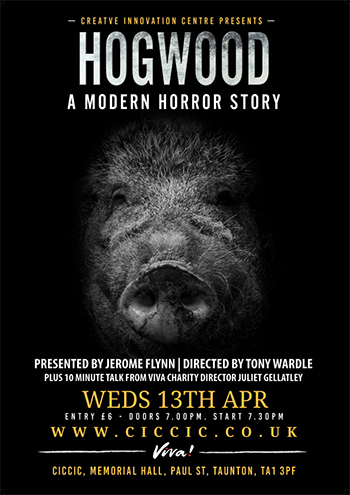 We have the pleasure of presenting this award winning documentary film made by charity Viva along with a special in-person 10 minute talk by charity director Juliet Gellatley. This screening also accompanies a fundraising music event on the same week on Friday 15th April at CICCIC and can be found here.

Running at just over 30 minutes, HOGWOOD explores the reasons behind factory farming and exposes the negligence and inaction by government bodies and corporations alike. It highlights how meat pollutes our planet and puts us at risk from disease outbreak. It explores why factory farming is supported and follows the brave fight to expose the truth and change the world. 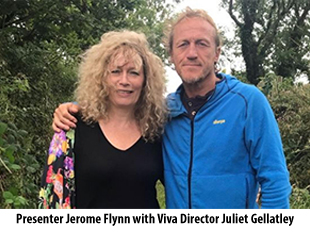 The documentary centres around a seemingly idyllic pig farm, named Hogwood. Jerome Flynn opens the documentary against the picturesque backdrop of rural England, just minutes away from Hogwood Farm. He tells the captivating tale of HOGWOOD and how it came to be one of the most infamous pig farms in the UK. His narrative is intertwined with undercover footage and interviews with investigators and activists representing the animal welfare group Viva! — who spearheaded the campaign. The film goes onto feature interviews with a livestock vet speaking out about her horrific on-the-job experiences for the first time. It concludes with expert comment from GP and public health expert, Dr Josh Cullimore and Oxford University researcher Joseph Poore.

Book tickets below but you can pay on the door but paying on the door does not secure your seat if we are at full capacity.