This event has been cancelled and rescheduled for early 2022.

Based in Dorset and Somerset, Mitchell and Vincent bring traditional and contemporary styles on fiddle and guitar to folk tunes and songs from around the British Isles, as well as original material drawing on the folk traditions, using varied arrangements to create stories with their tune sets as well as songs. Both Graham and David are also trained luthiers and play instruments hand-crafted by themselves. 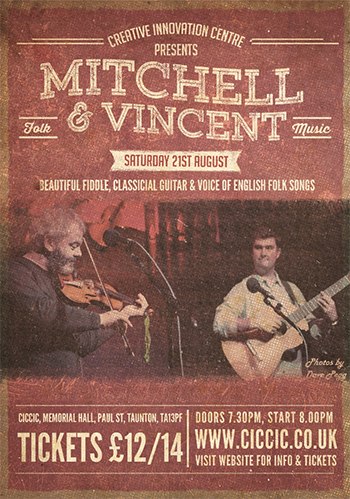 After first meeting in a ceilidh band, they decided to form a duo and since then have gone on to perform concerts around the UK (including festivals such as Glastonbury, Broadstairs, Oxford, Lyme Regis and Beverley) as well as supported renowned musicians including Tim Edey, Archie Fisher MBE, Jackie Oates, Damien O’Kane and Kate Rusby as well as Ralph McTell and Wizz Jones.

You too can enjoy the best of British folk music with this amazing intimate performance from Mitchell & Vincent at CICCIC.