Hullabaloo – a festival of improvisation, light and sound November 8th and 9th

The Hullabaloo Festival celebrates the art of improvisation, improvisation in music, performance and visual art.  Wild, unpredictable, fun and provocative the festival centres on the spontaneity at the heart of creativity and features ancient instruments, film projections, baroque music, electronics, performance, sound sculptures, song, percussion and visual art. Hullabaloo will explore some of the mysteries and paradoxes of ways of making music that combines simple playfulness with extra- ordinary skill.

Featured are some the UKs leading improvisers like the trombonist Robert Jarvis and multi -instrumentalist Jenny Bliss. The music will range from the ancient to the modern, from baroque and medieval music to electronics, together with film, performance and live visual art.

The festival also includes locally based performers like actor and theatre director Ged Stephenson, artist Michael Fairfax and film makers Hannah Earl and Richard Tomlinson. Also features is the percussionist Adam Bushell who grew up near Taunton and now lives in Brighton.

There will be a chance for people to come and explore their own creativity in music sound, visual art and the voice as well as three concerts. The Taunton based Hullabaloo Improvising Orchestra host the event and will be playing on the Friday night. The group has been meeting every month for over three years at the CIC and is always open to new members, for more details about the orchestra and the festival contact Tim Hill, milton3hill@yahoo.co.uk

Friday 8th From 8 pm – From Scratch 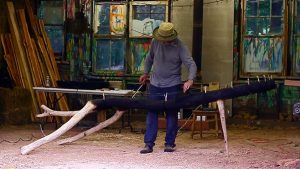 Sound, performance, text and chaos merge in this performance, ‘have they started yet’, are they ‘just making it up as they go along???? Come and find out

Some of the country’s leading improvisers come together to create music that draws on an extra -ordinary range of influences from ancient horns, through medieval and baroque music and jazz, to contemporary music and free improvisation.

We will hear the ancient British the Carnyx, an iron age war horn, marimba, viola de Gamba, drums, ancient horns, trombone, flute and much more. An evening of musical skill and adventure not to be missed. The performers include Jenny Bliss, a musician with an extra -ordinary range of music making from solo songs to

baroque violin sonatas to jazz and free improvisation. She has played with the Academy of Ancient Music and the Gabrieli Consort, the Independent on Sunday called her ‘ a richly gifted player with a sparkling style and boundless imagination’.

Robert Jarvis is an award-winning composer and trombonist, he has received the Performing Right Society’s Composer-In-Education Award. His most recent accomplishment is his astronomically inspired around North sound installation, which is now permanently installed in the grounds of Armagh Observatory.

Robert can be regularly heard playing with many different musicians, across different genres, including folk, improv, contemporary, and popular music, as well performing occasionally as a soloist, Percussionist Roger Skerman has unique and delicate approach to the drums. Adam is a noted contemporary percussionist performing with flautist Chris Parfitt as ‘Wind beats’ exploring through free improvisation the relationship between breath and touch creating intimate and expansive musical landscapes.