Daniel Pogorzelski -​ Tenor and soprano saxophone player. Daytime – professional woodwind instrument technician, after hours, jazz maniac as his friends called him. In truth, he can honestly admit to fall in love with jazz many years ago. In the past (back in Poland) being involved with some fusion jazz projects and avanguard experiments. Nowadays plays with big bands, fusion, New Orlean influenced street music with LittleBigHorns, and enjoying very exciting project with his DPQ quintet. 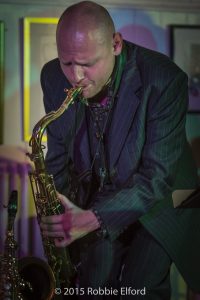 ​Bob Cronin – an American, born in New York City and has been living in the United Kingdom for over 30 years. Bob has been playing jazz since he was 15 years old leading him to tour with the US Navy Band before attending the Berklee College of Music in Boston.  Since arriving in England, Bob has played with various small and big bands. Most recently. the Mike Westbrook Big Band. 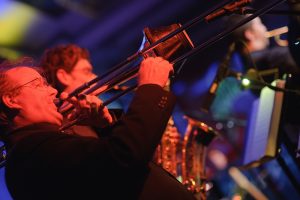 Richard Llewelyn –  Brought up in a jazz mad household he has been playing guitar since he was 7. He has worked in education, played with Arcadia Jazz Band for 18 years and has been fortunate to work alongside artists such as Kathy Stobart, Tony Roberts, John Critchenson, Rosemary Squires, Pete Strange, Chris Gradwell and Henry Lowther and played in support bands for the likes of Humphrey Lyttleton, George Melly and Kenny Ball. He has regularly ‘woodsheded’ with Tony Roberts since 2008 developing musical ideas and techniques and regularly deputises for other bands. He currently regularly plays with DPQ, Tony Roberts, Rachael Roberts & the Gatsby Gang and Duncan Anselm’s Blue Note project.

Ian Evans is a Professional drummer and percussionist from the South West. Starting his playing career at the tender age of 3, he has spent many years honing his musical skills with various outfits including his own ensemble, Apollo Jazz, at Bath Spa University and during a stint with NYJO. He prides himself on being versatile and always using his ear. He loves playing most styles of music but jazz, latin and funk are his favourites. Ian is proud to be a Roland Teacher Ambassador and JHS KeyPlayer.”​

​Will Helton – Raised in a swing and big band-loving household, Will started playing guitar at the age of 8, but switched to the double bass in his teens. Since that time he has been fortunate to play with a number of outstanding and interesting musicians across a range of styles in the U.S., Germany and the UK including Tony Oreshko, Larry Garner, Clarence Spady, Michael van Merwyk and Graeme Fifield-Hall. When not playing his bass, Will somehow finds time to pursue his day job in German & Dutch to English translations and digital marketing.