Meaningful Music is a new CICCIC programme that provides an amazing performance by some of the creative and most talented musicians throughout the UK. But not only do you get a professional music experience but also an exclusive intimate interview with the artist about the journey their music and career has taken. From stories of bumping into the famous to struggles that make them the special musicians they are. Exclusively at CICCIC. 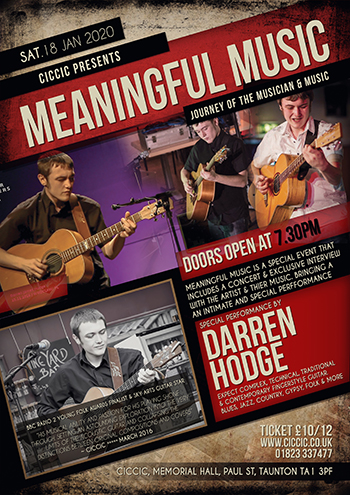 Darren has been astounding audiences up and down the country with his ability to take the Acoustic Guitar to breathtaking limits. His instrumental playing spans a repertoire of Blues, Jazz, Country, Gypsy Jazz and Travis Picking, and audiences are mesmerised with the challenges that Darren sets himself.

Darren has been very busy over the last couple of years and has already graced the stage with some of the world’s best artists, including Tommy Emmanuel, Megson, Cara Dillon, Seth Lakeman and Lulo Reinhardt.

He reached the final 10 of the BBC Radio 2 Young Folk Awards in 2014 and in 2015 took part in the Sky Arts TV Competition, Guitar Star. This new series has opened up a whole new chapter in his career.

Darren is fast becoming known as the Real Deal with glowing tributes from the likes of, Tommy Emmanuel, Huey Morgan, Nitin Sawhney and Rodrigo y Gabriela to name but a few.

As a young artist you’ll be amazed with his technical finger style playing and as a musician from Taunton your evening with Darren will be one to remember. Darren has also played at CICCIC several times but two years have past since his last performance and his new work will be must for new and established listeners.