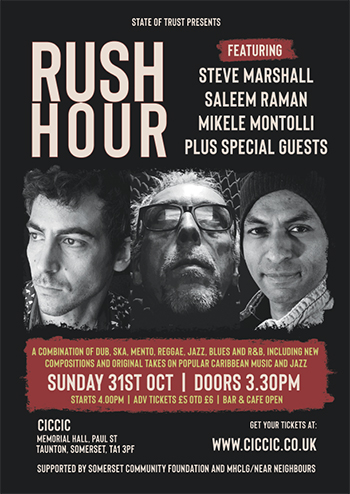 Before the concert we are offering a free dance workshop led by Caribbean dance specialist Ellen Miller. The workshop is an opportunity to have fun and learn some traditional Caribbean dance steps – from Mento to Calypso to Carnival and beyond! Suitable for beginners and all those aged 10 years and above. 11:30am-12:30pm. Learn more.

Steve Marshall was co-founder of Pyramid Arts Development, the seminal Dalston arts centre and music school, and has worked with such diverse musical talents as Clifford Jarvis, Lee “Scratch” Perry, George Clinton and Keith Richards. 2xGrammy nominated as a producer in the category ‘Best Reggae Album’ Steve is currently touring as an original artist in his own right.

With roots in Mauritius and South London, Saleem Raman has recorded and performed with artists such as Layla Hathaway, Esperanza Spalding, Julia Biel, Robert Mitchell, Sen3 and rapper LowKey. Saleem is a regular in the house band at Ronnie Scott’s in London.

Ellen Miller is well known as an educator and dancer with specialisms in Caribbean dance, Jive and Lindy Hop. As a member of Kokuma Dance Theatre, Fours Company Dance Theatre, Zoots & Spangles and The Jiving Lindy Hoppers Ellen has performed widely.

RushHour is a collective of musicians and dancers who join forces to pay tribute to the Windrush generation and their descendants, and the contribution they have made to UK culture and society.

The project involves a series of live concerts in the South-West and London, a new composition initiative featuring contributions from the likes of Steve Marshall, Saleem Raman and Mikele Montolli, Alan Weekes, Kenrick Rowe and Michael ‘Bammi’ Rose, a programme of online events including panels, presentations and classes, and an educational programme for schools and colleges.

RushHour is supported by MHCLG and Near Neighbours. The new composition element has been partially supported by PRS Foundation Open Fund for Organisations. For further information, music and films visit: www.stateoftrust.net/windrush-hour