(booking online is the only guarantee of entry as these concerts are proving very popular!)

A number of different jazz lineups will cover the third Sunday of each month to bring you your regular helping of lunchtime jazz whilst the Big Band takes it’s summer break.

Sunday Lunchtime Jazz brings the Dan Pogorzelski Quintet this month which contains many musicians who play here regularly with the Big Band. 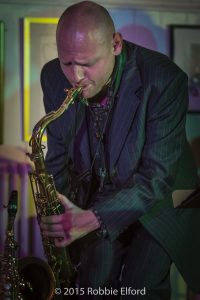 ​Daniel Pogorzelski – Tenor and soprano saxophone player. Daytime – professional woodwind instrument technician, after hours, jazz maniac as his friends called him. In truth, he can honestly admit to fall in love with jazz many years ago. In the past (back in Poland) being involved with some fusion jazz projects and avanguard experiments. Nowadays plays with big bands, New Orlean influenced street music with LittleBigHorns, and enjoying a very exciting project with his DPQ quartet. ​

​Richard Llewelyn –  Brought up in a jazz mad household he has been playing guitar since he was 7. 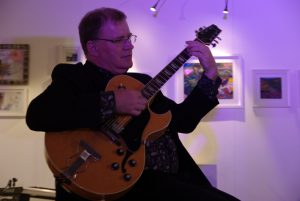 He has worked in education, played with Arcadia Jazz Band for 18 years and has been fortunate to work alongside artists such as Kathy Stobart, Tony Roberts, John Critchenson, Rosemary Squires, Pete Strange, Chris Gradwell and Henry Lowther and played in support bands for the likes of Humphrey Lyttleton, George Melly and Kenny Ball. He has regularly ‘woodsheded’ with Tony Roberts since 2008 developing musical ideas and techniques and regularly deputises for other bands. He currently regularly plays with DPQ, Tony Roberts, Rachael Roberts & the Gatsby Gang and Duncan Anselm’s Blue Note project. ​

Will Helton – Raised in a swing and big band-loving household, Will started playing guitar at the

age of 8, but switched to the double bass in his teens. Since that time he has been fortunate to play with a number of outstanding and interesting musicians across a range of styles in the U.S., Germany and the UK including Tony Oreshko, Larry Garner, Clarence Spady, Michael van Merwyk and Graeme Fifield-Hall. When not playing his bass, Will somehow finds time to pursue his day job in German & Dutch to English translations and digital marketing.​

Bob Cronin – an American, born in New York City and has been living in the United Kingdom for over 30 years. Bob has been playing jazz since he was 15 years old leading him to tour with the US Navy Band before attending the Berklee College of Music in

Boston.  Since arriving in England, Bob has played with various small and big bands. Most recently. the Mike Westbrook Big Band.​

Paolo grew up in a tiny village in the Italian region of Molise called Mirabello Sannitico. Being raised 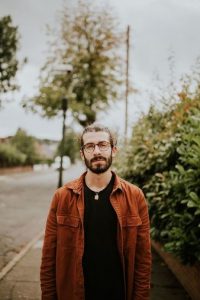 in a musical environment,  he soon showed interest in music early in the childhood, and paricularly, a very profound love to the drums. His parents, caught by this, bought him his first ever drum kit at the age of 4. That was beginning of his adventure. Playing along and listening the music of one of his favourite drummers, Phil Collins’, he taught himself how to play.  Soon after he turned 10, his father exposed him to Jazz music and began listening to John Coltrane, Miles Davies, Elvin Jones, Joshua Redman and Brian Blade. He signed him up at the“Thelonious Monk Jazz Accademy” of Campobasso where he attended for 9 years.  Along these years he’s been followed by different drum tutors such as Donato Cimaglia, Antonio Conte and Alberto Romano. He’s been selected for 6 consecutive years to attend the JazzPuzzle, a seminary that used to take part in the city of Mouscron, Belgium. There he met and worked with many musicians from all over Europe. Shortly after he turned 19, since he has always been an adventurous type of person, decided to relocate himself to follow his dream of being a musician, and in the 2012 he moved to Bristol. From then through today’s days, he studied and played with most of the master musicians living in the UK including Andy Sheppard, Jake McMurchie, John Law, John-Paul Gard, Ben Thomas, Lee Godhall, as well as Chad Lefkowitz-Brown from NYC and John Dalton from L.A. and he’s currently in high demand for his jazz drumming.  People who performed with him describe his playing as musical, energetic and colourful. ​

​​While continuing to work as a session musician, he’s currently a member of the Bristol pan African band Mankala, and many other projects such as TukTuk, BEJE, Aeddan Williams band. ​

Paolo is also a drum tutor, working in primary, secondary schools and privately

Come and enjoy a morning jazz session before your Sunday lunch!  The cafe is open for the duration for hot and cold drinks.