It is with regret that due to unforeseen circumstances this event has been cancelled. Ticket holders have been notified. We apologise for the inconvenience. 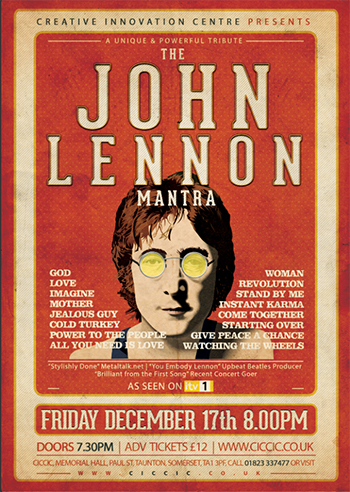 Enjoy a unique and powerful tribute to the music of John Lennon and on 8th December 1980 John Lennon died so we celebrate Lennon’s anniversary with band The John Lennon Mantra.

Celebrating the energy & passion of the most influential songwriter of the 20th Century this prestigious act focuses on the man and his work after The Beatles. Delivering his acclaimed work with passion, love and a little bit of bagism.

Top class John Lennon tribute as seen on ITV1 primetime. Have played Beatles Week in Liverpool, The Legends Of Rock Festival & The Acoustic Festival Of Britain etc. Performing as a duo with beautifully crafted, purpose made backing tracks recreating the sound & energy of the Legend.